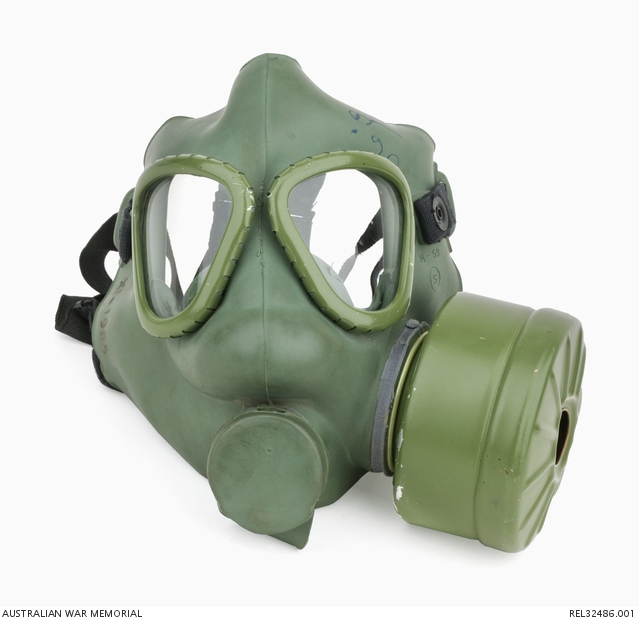 Green rubber M-59 respirator with green painted metal cheek filter canister marked in black 'XI-1985'. The rubber is similarly marked in black and also has moulded lettering 'M-59' and 'S' within a circle. The plastic eyepieces are attached to the mask with crimped green painted metal. There is Arabic script in blue biro above the left eyepiece. The mask is secured to the head by black elastic straps.

Type M-59 Iraqi gas mask of Yugoslav manufacture, based on a US pattern issued during the Vietnam War. During the reign of Saddam Hussein the Iraqi armed forces bought military technology and equipment from all over the world but also manufactured their own equipment of both indigenous and imported designs. This mask was collected in Iraq by the Royal Australian Air Force during Operation Catalyst, the Australian Defence Force contribution to the rehabilitation and reconstruction of Iraq. Operation Catalyst commenced on 16 July 2003. Working with the Interim Iraqi Government, the ADF contributed to Multinational Force efforts to develop a secure and stable environment in Iraq and assisted in national recovery programs.