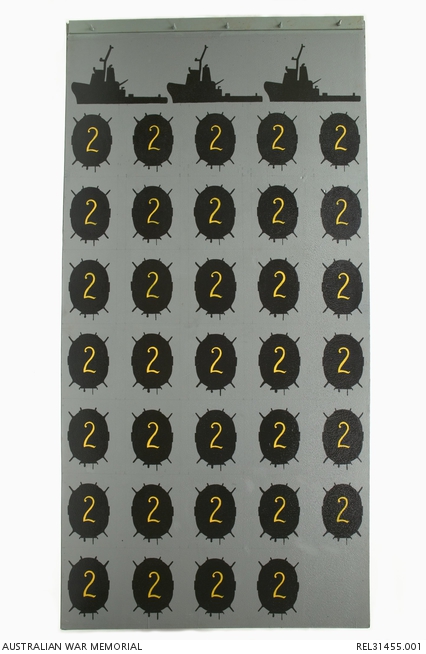 Grey painted plywood tally board from HMAS Kanimbla attached at the top, by five bolts, to a grey painted steel 'U' channel. Each end of the channel has been drilled through with a single hole to take a suspension rope. A long length of this rope is attached to the one of the holes only. The back of the board is painted black and has large sections of non-slip emery paper attached to it. Across the upper front of the board are three black painted silhouettes of ships, representing three Iraqi minelayers. Beneath, in rows of five, are black painted silhouettes of 34 sea mines, each with a yellow '2' painted in the centre, representing 68 captured mines.

This hand painted, improvised tally board was suspended from the port bridge wing of HMAS Kanimbla on her return to Sydney after a six month deployment to the Persian Gulf in 2003 as part of Operation Falconer.

It records the number of mines seized by Kanimbla after intercepting the Iraqi minelayers ‘Al-Rayiah' and 'Jumariya' (also known as 'Jamhoria') in late March, and was displayed on the bridge to show Australia and families waiting on the wharf what had been achieved during Kanimbla’s six months on active service. The Jumariya was towing a barge with 68 LUGM 145 sea mines and Manta seabed influence mines. These were concealed in empty 200 litre (44 gallon) barrels. The barrels were lined in rows, simulating a cargo barge and tug. One of the mines collected seized from the Jumariya is now part of the Memorial’s collection (REL31392.001). Jumariya was then sailed from Iraqi waters to Kuwait City under the Australian Naval White Ensignby a Steaming Party comprising officers and sailors from Kanimbla's ships’ company.

The tally board, known to the ship’s company as ‘The Brag Board’, was created on direction from the Commanding Officer, Captain David McCourt, and was designed and painted by Leading Seaman Communications Information Systems Skill Grade 3 (LSCIS3) Gerard Pratt with the help of LSCIS3 Louise Hillier, Able Seaman Communications and Information Systems Skill Grade 2 Alina Green and Signaller Cameron Maher. The silhouettes of the tugs were created by using a template based on a photograph of the tug obtained from the Navy photographers onboard Kanimbla. The silhouettes of the mines are representational only, and are based on images of First and Second world War mines. Captain McCourt’s original idea was to paint all 68 mines directly onto the side of the ship. However, it was decided that plywood boards should be used instead and then hung on the ship. Due to time and space constraints, the number 2 was painted on 34 mines to represent the total of 68 seized.

The halyard that was used to secure the tally board to the ship's side had been previously used as a flag hoist halyard.


The amphibious transport HMAS Kanimbla (LPA-51) was acquired by the Royal Australian Navy from the US Navy in 1994 for use as a helicopter support and sea training vessel. During 2003, while participating in Maritime Interception Operations in the Persian Gulf and in the war on Iraq, Kanimbla served as command and control platform for the Australian Task Group. Coalition boarding operations were also coordinated from the ship.