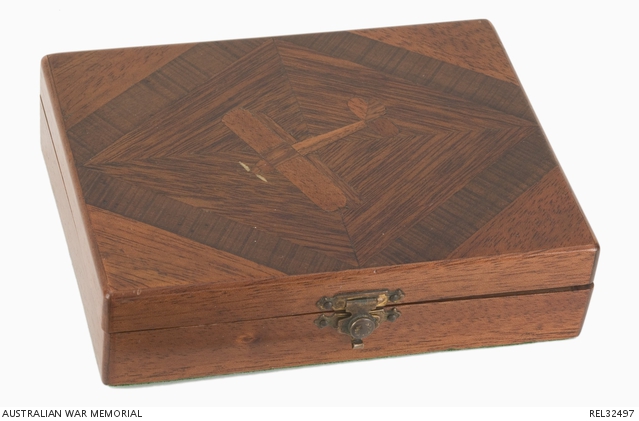 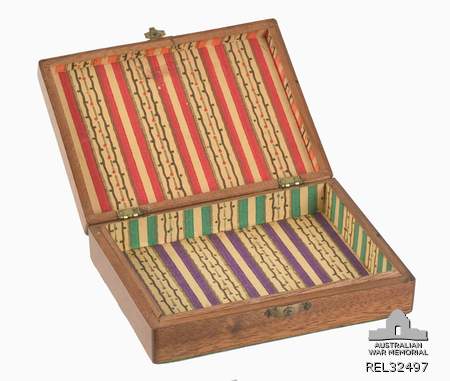 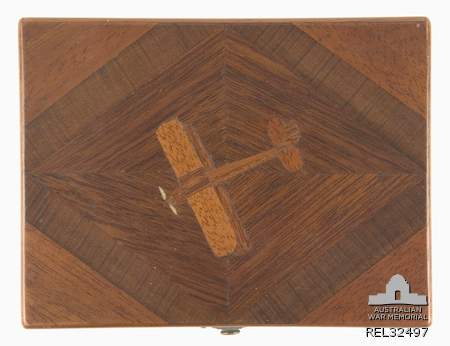 Wooden box made by Wing Commander Francis Blomfield (Frank) Chapman during his service in the RAAF. The box is made of Queensland timber, and the lid is inlaid with a diamond pattern, at the centre of which is an inlaid biplane. The hinged lid is secured by a pair of brass hinges, and there is a brass clasp at the front. The base of the box has a layer of green felt. Inside is a lining of striped wallpaper in four colour variations of the same pattern.

Made by 271349 Wing Commander Francis Blomfield 'Chappie' Chapman, 20 Squadron. Born at Uralla, NSW in 1911, Chapman showed an early interest in aviation, training with the RAAF reserve at Point Cook from 1932. From late 1936 to late 1938, Chapman was seconded to the RAF on a short service commission, training in sea planes and instrument flying at Gosport and Manston, where his skills were rated as 'exceptional'. He met and married Bernice while in England.

Upon returning to Australia, he was immediately appointed to the Reserve and by August 1940 was flying with 2 Squadron, which had just re-equipped with Lockheed Hudsons. At the same time, the RAAF was preparing to take delivery of its first 18 PBY Catalinas and due to the USA's state of neutrality, was obliged to use civil crews and markings to man the delivery flights from San Diego, through Honolulu, Canton Island and Noumea to Sydney. Chapman was chosen as one of the crew (second pilot from San Diego to Honolulu; navigator from Honolulu to Noumea, where he disembarked and returned to Hawaii for the next Catalina) and was seconded to Qantas, via the Civil Branch, Department of Air from 30 October 1940 until April 1941.

After spending the remainder of 1941 at Rathmines with the Seaplane Training Flight, Squadron Leader Chapman was appointed Commanding Officer (CO) of 11 (Catalina) Squadron, Port Moresby, on 9 February 1942. In late January 1943, Chapman was appointed CO of 20 (Catalina) Squadron, just 10 days after he was recommended for the Distinguished Flying Cross (DFC). The citation best summarises Chapman's flying experience: 'This officer has been actively engaged in operational flying against the enemy since February 1942 completing 907 operational hours' flying, including 20 raids in Catalina aircraft against Rabaul, Kavieng, Buka, Kahili and other targets in the South-West Pacific Area. On 14 November 1942 he led a raid of Catalina aircraft against the airdrome at Kahili causing extensive damage to fuel dumps, stores and destroying eight enemy aircraft and damaging others in a low level attack On 19 November 1942 he was responsible for creating extensive damage to the enemy airbase at Kavieng, and again on 27 December. During all these raids his aircraft has been subjected to heavy anti-aircraft fire, but he has, by his determination carried out his allotted tasks with the utmost success. As Commanding Officer of No 11 Squadron, Squadron Leader Chapman has shown outstanding qualities of leadership which have proved an inspiration to all members of his squadron.'

In the early hours of 8 March 1943, Chapman and his crew (Flying Officer (F/O) SA Deacon; Sgt R Stephens; F/O JTD Todd; Sgt JE Dewhurst, Leading Aircraftman (LAC) RG Docking, F/O M Bradshaw, Flight Sgt LG Stanley and LAC CN Anderson) flying Catalina A24-22 left Cairns for Fall River and Gasmata on a patrolling mission. It was to be Chapman's last mission before being appointed Wing Commander and moving south. The Catalina refulled at Fall River, and radioed in an 'on patrol' report at 9:45 am. Twenty five minutes later Chapman radioed a signal 'On fire. Forced to land. Thirty miles south east Gasmata'. Nothing has ever been found of Catalina A24-22, nor of the nine crew, despite a three day search by 11 Squadron immediately after they went missing. Both Chapman's wife and mother followed rumours and reports of possible sightings of Chapman in various POW camps and even incarcerated in post-war Russia, but to no avail. Chapman was officially presumed dead in March 1955.