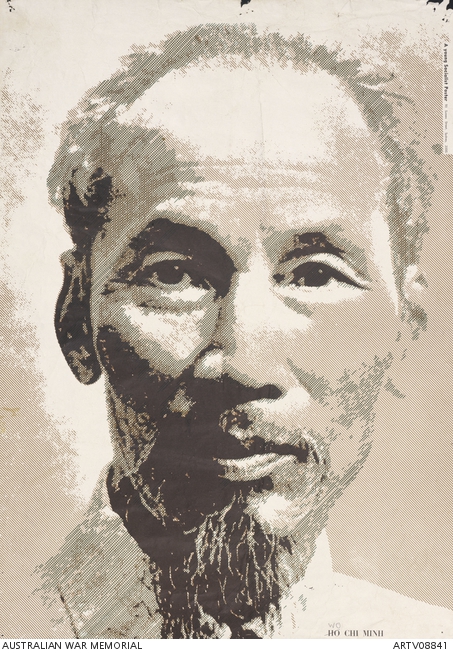 A head and shoulders portrait of the Vietnamese leader Ho Chi Minh. The poster was issued by the Young Socialists in Sydney. Ho Chi Minh (1890-1969), whose real name was Nguyen Tat Thanh, was the Vietnamese Communist leader and principal force behind the Vietnamese struggle against French colonial rule. Born in Central Vietnam, he attended school in Hue and then briefly taught at a private school in Phan Thiet. In 1911 he worked on a French steamship liner and worked in London and Paris. After the First World War he became engaged in radical activities and was in the founding group of the French Communist party. In 1924 he was sent to Canton, China, where he organised a revolutionary movement among Vietnamese exiles. He returned to China in 1930 to found the Indochinese Communist Party (ICP). When Japan occupied Vietnam in 1941, he resumed contact with ICP leaders and helped to found a new Communist dominated independence movement, possibly known as the Vietminh, that fought the Japanese. In 1945, when Japan surrendered, the Vietminh seized power and proclaimed the Democratic Republic of Vietnam (DRV) in Hanoi. After the 1954 Battle of Dien Bien Phu (against French troops), the north of Vietnam was assigned to the Vietminh and the DRV, with Ho Chi Minh as president, began the construction of a Communist society in North Vietnam. In the 1960s Ho Chi Minh's role was largely reduced to a ceremonial role. He died in 1969 of a heart failure. After the Communist conquest of South Vietnam in 1975, Saigon was renamed Ho Chi Minh City, in his honour.