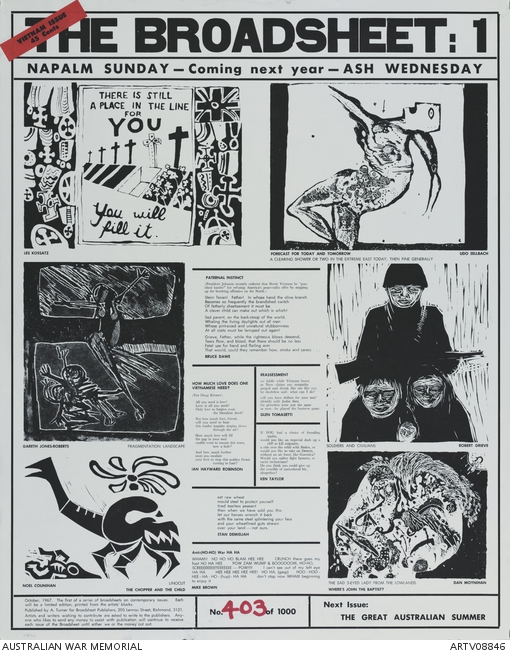 A poster commenting on the social issue of Vietnam. Broadsheet 1 was published in 1967 in an edition of 1000, the first in a series dealing with contemporary issues. Images on the poster include the Viet Cong, crosses, dead bodies, a scorpion, a disfigured face and skeletons. Broadsheet 1 included poems by Bruce Dawe, Ian Hayward Robinson, Glen Tomasetti, Ken Taylor, Stan Demidjah and Mike Brown with illustrations by Les Kossatz, Udo Sellbach, Gareth Jones-Roberts, Robert Grieve, Noel Counihan and Daniel Moynihan. Broadsheet Publishers was made up of a group of visual artists, writers and poets who produced four collaborative posters which addressed a variety of social issues. Broadsheets 1 and 3 were devoted to aspects of the Vietnam War. A number of fine artists produced protest posters in Australia between the mid 1960s and 1975, of which this one was one of a number featuring prints and poems remonstrating against Australia's part in the war.