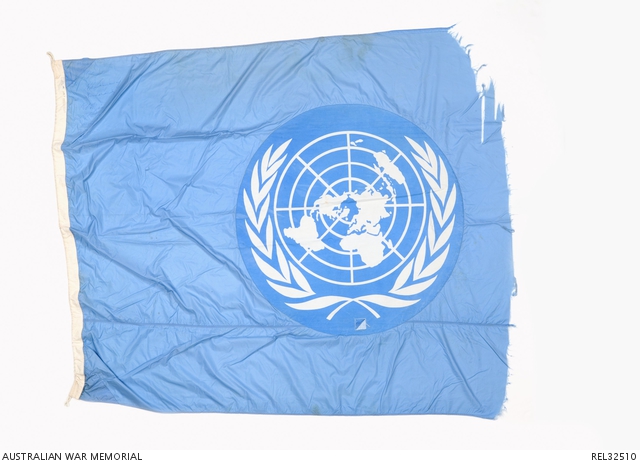 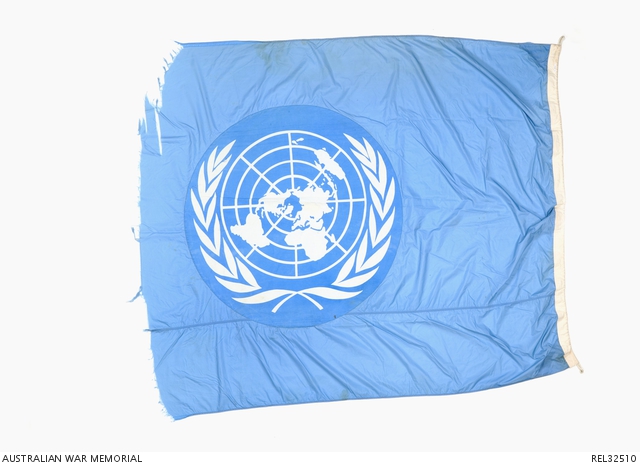 Blue nylon United Nations flag flown over the headquarters of UNTSO's Jordan-Israel Mixed Armistice Commission (MAC) in Jerusalem at the start of the Six Day War between Israel and Jordan on 5 June 1967. The flag has a white canvas hoist with a short length of white nylon rope at each end. There is a white maker's label sewn to the hoist as well as black stamped markings reading 'UNITED NATIONS 6' X 9''. The figures '1/7-66' are also hand written in black ink on the hoist. The United Nations logo at the centre of the flag on each side is printed on a circular section of cotton fabric which has then been machine stitched in place. The signatures on the top left corner of the flag, close to the hoist, are those of: Lieutenant Colonel M C Stanaway MC (New Zealand Army), Major C F J Woodland (Australian Army), Major R E Skinner (Australian Army), Major A S Derrick (Canadian Army), Husni (Jordanian), Major D H Crabb (New Zealand Army), Major B Nordberg (Swedish Army) and Mr A Dy Soneja (Filipino, UN Field Service). One illegible signature is also present.

Blue nylon United Nations flag flown over the headquarters of UNTSO's Jordan-Israel Mixed Armistice Commission (MAC) in Jerusalem at the start of the Six Day War between Israel and Jordan on 5 June 1967. After providing a replacement flag, Major Colin Frederick John (Col) Woodland, who was serving with the United Nations Truce Supervision Organisation (UNTSO), later collected this flag which was signed by those present. Col Woodland was born at Peking, China, in 1922, son of Australian Salvationist missionary parents. He was raised and educated in China, mostly at the English-speaking Tientsin Grammar School, although he and his family visited Australia several times on leave. In 1940, completing his education in Shanghai, Woodland obtained a position with a local import-export firm, and also joined the Shanghai Volunteer Corps, a citizen's military unit. He later became part of the Shanghai Scottish company, and helped to guard the perimeter of the International Settlement against Japanese incursion. Owing to his father's deteriorating health, Woodland and his family left China in November 1941, and returned to Australia, narrowly avoiding the Japanese attacks on Hong Kong, Singapore and Jakarta en route. While in Singapore, he attempted to join a British regiment, but decided to follow his father's advice and return to Australia before enlisting. In February 1942, he was accepted for service in the AIF, becoming QX29957 with 7 Pioneer Company, and in February 1943 he was posted to New Guinea as a reinforcement to 2/7 Infantry Battalion, joining the unit at Wau. During the following months, Woodland saw service at Wau, Mubo and Salamaua, but he was evacuated late in the year suffering from sciatica. A further series of injuries rendered him unfit for active service, and he was discharged in mid 1944, joining the Commonwealth Public Service. In 1952 he enlisted in the CMF, and in 1957 he was commissioned as a second lieutenant with the 3rd Infantry Battalion. In 1966, he applied to become an officer with UNTSO in Palestine, and was transferred to the regular army with the rank of Major. The posting to UNTSO took Woodland and his family to Jerusalem, but the deteriorating situation and increasing hostility between Israel and Jordan led to the evacuation of families in May 1967. On 5 June 1967, the Six Day War broke out, and the MAC headquarters of UNTSO in Jerusalem were at the centre of serious fighting as Israeli forces defeated the Jordanian Army. Woodland remained on duty with other observers throughout the fighting, and oversaw the signing of the ceasefire on the Damascus road some days later. In 1969, he returned to Australia and, on discharge from the regular army, rejoined the CMF. He later became part of the Department of Foreign Affairs Aid Branch, and worked in Vietnam and the south west Pacific before retiring from the public service in 1974. Col Woodland died in Queensland in 1997.