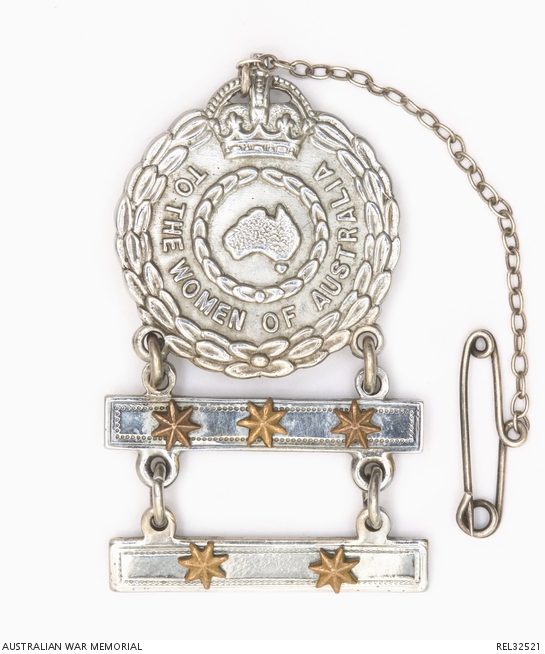 Circular silver badge edged by a wreath and surmounted by a King's crown. In the centre is a map of Australia surrounded by another wreath and the words 'TO THE WOMEN OF AUSTRALIA'. Suspended below the badge by a pair of rings are two bars, the first with three seven pointed bronze stars and the second with two. The reverse is impressed with the serial number 'A58718' and has the raised words 'ISSUED BY THE C'WLTH GOVT' and 'G & E RODD 1940'. The recipient's details, 'R. Maude Munro (nee Wells)' are also engraved on the reverse. The badge has a pin fastening and safety chain on the back.

This badge was issued to the wife and/or mother or nearest female relative of Australians who were on active service abroad during the Second World War. Each star on the badge represents a son or relative on active service. This badge was worn by Ruby Maude Munro (nee Wells) in recognition of the service of her six sons WX27669 Colin Edward Munro AIF, WX117 Donald Alexander Munro AIF, 7122 Kelvin Gordon Munro RAAF, 16782 Mervyn Keith Munro RAAF, 4249 Alex Bruce Munro RAAF and 441291 Peter Munro RAAF. Since only five stars are present on her badge, it is possible that the badge itself represents her first son. Colin Munro was born in September 1912 in Guildford, WA. He enlisted in August 1942, and was discharged in February 1946 as a warrant officer. Kelvin Munro, husband of Thelma Munro, was born in November 1914 in Perth, WA. He enlisted in the RAAF in November 1939 and served as a pilot officer in 35 (Pathfinder) Squadron RAF. On the night of 7 March 1945, while acting as Master Bomber, Lancaster ME 361 (coded TL-H) was shot down over Hemmingstedt, and all of the crew were killed. Kelvin Munro is buried at Hamburg Cemetery, Germany. Donald Munro was born in August 1918 at Albany, WA and enlisted in the Army at the age of 21. He served as a gunner in 2/3 Field Regiment, Australian Artillery and was discharged in September 1945. Alex Munro was born in September 1919 in North Perth, WA. He enlisted in March 1939 and served as RAAF ground staff throughout the war. He was discharged in August 1946 with the rank of sergeant. Mervyn Munro enlisted in the RAAF as an engine fitter. He remustered to aircrew in England and served as a flight engineer with 10 Squadron RAAF, operating Sunderland flying boats from Mt Batten, UK. He was discharged with the rank of flying officer. Peter Munro also served in 10 Squadron. He was born in May 1925 in Leederville, WA and enlisted in June 1943, serving as an air gunner in several Sunderland crews. He achieved the rank of warrant officer and was discharged in January 1946.