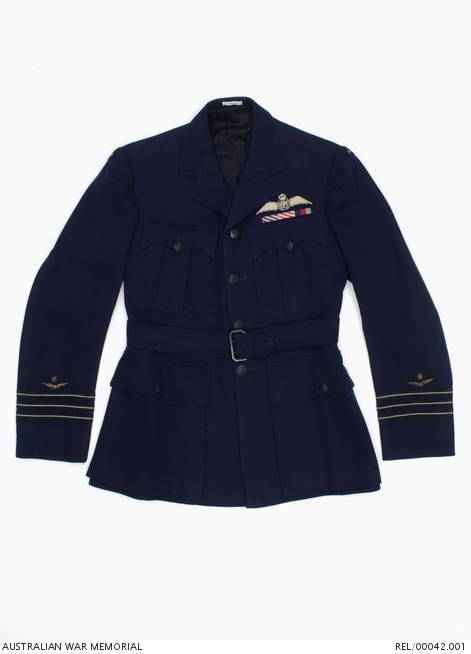 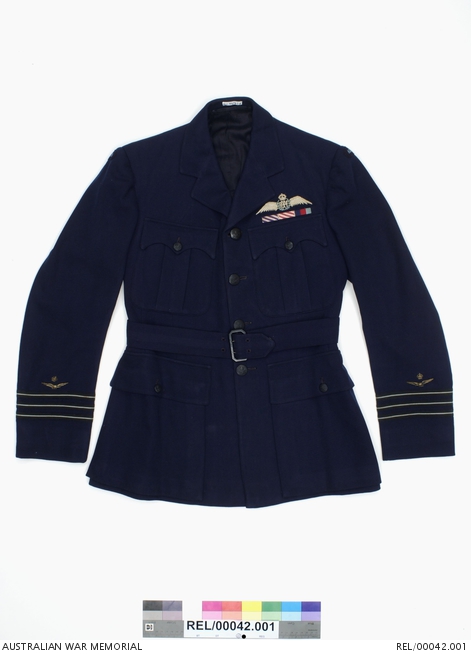 RAAF blue officer's winter service dress tunic with a pair of pleated breast patch pockets and a pair of expanding patch waist pockets. The pockets have flaps secured by black plastic RAAF buttons, those on the breast having three pointed flaps, while those at the waist are square. A small inset pocket is located above the right waist pocket. The tunic has a square pocket inside the right front panel and another internal pocket over the left breast. A white cotton label sewn inside this pocket reads 'GIEVES LTD 8.1.42. A/1129. J.K.Douglas. Pt.' The ribbons of the Distinguished Flying Cross, Air Force Cross and 1939- 1945 Star are sewn above the left hand breast pocket. Above these is a pair of blue and white embroidered RAAF pilot's wings. The rank insignia of a Squadron Leader (three narrow rings) is carried on each lower sleeve, along with an oxidised brass eagle and crown. At each shoulder is an embroidered blue 'AUSTRALIA' title. The tunic is closed by four large black plastic RAAF buttons, and belted at the waist. The self fabric belt is stitched to the rear of the tunic and has a black plastic buckle with two metal claws.

This tunic was worn by 403564 Wing Commander John Keith Douglas, DFC, AFC. Born in Tamworth, NSW, Douglas was one of the RAAF's outstanding leaders, having seen extensive service with 103 and 166 Squadrons, RAF, before taking command of 460 (Lancaster) Squadron, RAAF in early 1944. Aged just 22, he thus became the youngest Australian squadron commander, and one of the youngest in Bomber Command. In October 1944 he was posted to command 467 Squadron RAAF, again flying Lancasters. He was awarded the Distinguished Flying Cross in 1943 and the Air Force Cross in 1944. Douglas was shot down and killed near Munster, Germany, after attacking the Dortmund-Ems canal on 8 February, 1945. He is buried at Reichswald Forest War Cemetery, near Kleve in western Germany.