Hand coloured pportrait of a person modelling a uniform dyed by the Eastern Command Salvage and ... 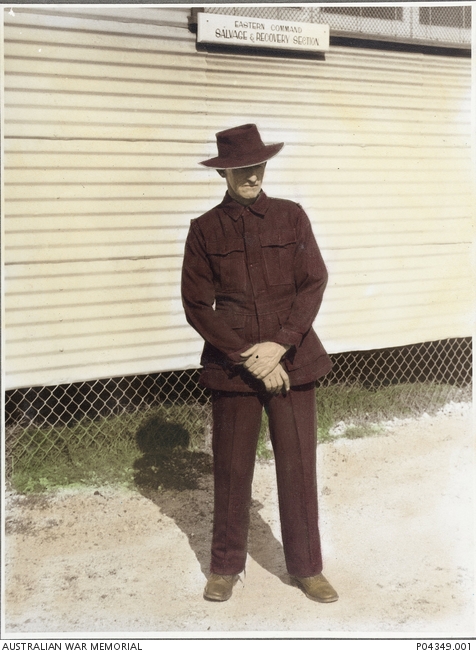 Hand coloured pportrait of a person modelling a uniform dyed by the Eastern Command Salvage and Recovery Section.
The Salvage and Recovery Section were responsible for collecting and repairing unserviceable Australian army khaki uniforms, repairing them, and dyeing them the distinctive maroon that was required uniform for enemy prisoners of war. It was found that the section could carry out the work for far less cost than a civilian contractor. Until 1942 there were not enough surplus uniforms available for dyeing and issue to prisoners of war or internees. Internees were required to bring their own clothing into camp and prisoners wore the uniforms in which they had been captured supplemented by civilian issue clothing. From 1942 both groups were required to wear the distinctive red issue clothing, which was produced in both uniform and civilian styles. Generally speaking, prisoners of war were allowed to retain their own national headdress until it wore out. The compulsory wearing of red clothing by civilian internees varied from camp to camp and seems to have been at the camp commandants' discretion. Many commandants found that civilian internees worked better when allowed to wear their own clothes, but others insisted they wear red as the prisonersof war were required to do.