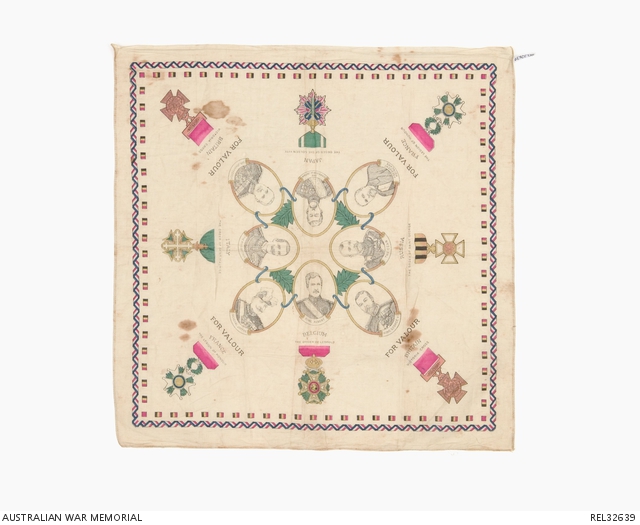 Square cotton scarf printed around the edge with a decorative border of zig zag ribbon in the colours red, white and blue. Inside this edging is another border of small evenly spaced Belgian flags. In the centre are the portraits of eight state and military leaders of the allied nations. Beneath the portraits are representations of each nation's highest award for gallantry. Clockwise from the bottom right is King George V of Britain with the Victoria Cross, King Albert with Belgium's Order of Leopold, General Joffre and the French Legion of Honour, The King of Italy and the Order of Saint Maurice, Sir John French and the Victoria Cross once again, The Emperor of Japan and the Order of the Golden Kite, President Poincare and the French Legion of Honour, and the Csar and Russia's Order of Saint George.

The history of this particular scarf is unknown. However patriotic scarves, handkerchiefs and the like were poopular souvenirs during the First World War and were often sold as fundraisers.