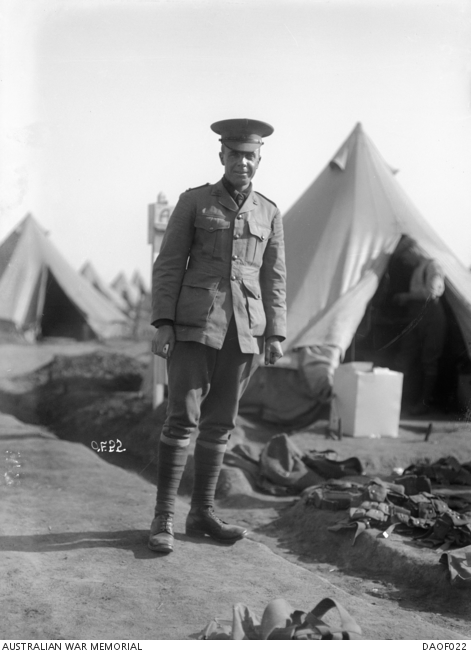 Portrait of Lieutenant I R Flett, 23rd Battalion, probably Second Lieutenant (2nd Lt) Irving Russell Flett. A salesman from Brighton, Victoria prior to enlistment, 2nd Lt Flett embarked with A Company from Melbourne aboard HMAT Euripides on 10 May 1915. Later promoted to Lieutenant, he was one of the last soldiers to leave Gallipoli Peninsula after the evacuation. Lt Flett was killed in action on 28 July 1916 at Pozieres, France, aged 29, and is commemorated on the Villers-Bretonneux Memorial. This is one of a series of photographs taken by the Darge Photographic Company which had a concession to take photographs at the Broadmeadows and Seymour army camps during the First World War. In the 1930s, the Australian War Memorial purchased the original glass negatives from Algernon Darge, along with the photographers' notebooks. The notebooks contain brief details, usually a surname or unit name, for each negative. The names are transcribed as they appear in the notebooks. See also P10699.002.