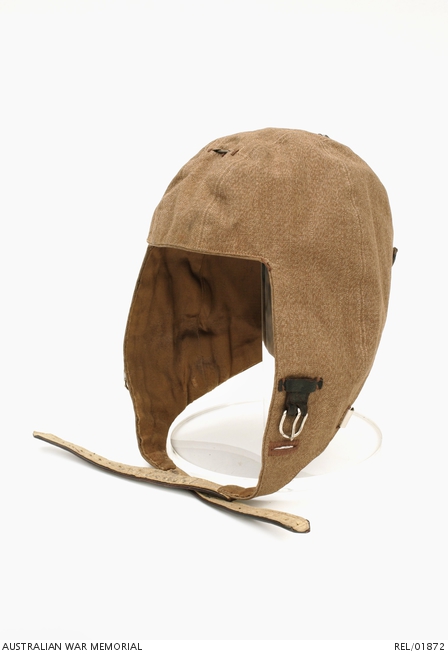 Luftwaffe FK-34 summer weight flying helmet. The helmet is made of light brown flecked fabric lined with olive green cotton sateen, and has a pair of chamois lined leather cross-over chin straps which buckle at each cheek. A metal hook beneath each earpiece and a wire loop on an adjustable cotton webbing strap mounted above the forehead enable the 3-strap Luftwaffe oxygen mask (not present) to be attached. There is no provision for communication equipment. On the rear of the helmet above the neck are a pair of leather press-stud loops, intended to retain the goggle strap. A black cotton label stitched inside the lining is machine embroidered with the words 'G. A. HOFFMAN BERLIN S.W.29 1938', and stamped in white paint with the numeral '58'. A partially legible stamp in black ink inside the left hand chinstrap appears to read 'L. Kgs Sch F Bruck'.

The FK34 summer weight flying helmet, and its fleece lined leather winter equivalent, the K33, were introduced in 1936, and designed for aircrew positions which did not require radio communication. During the early years of the Second World War, this included many pilots of single engined fighters, as well as training crews and some combat positions on larger aircraft. Production continued until about 1943, although they had long been superceded in service in by the LKp 100 and 101 series helmets with built in headphones and microphone equipment.