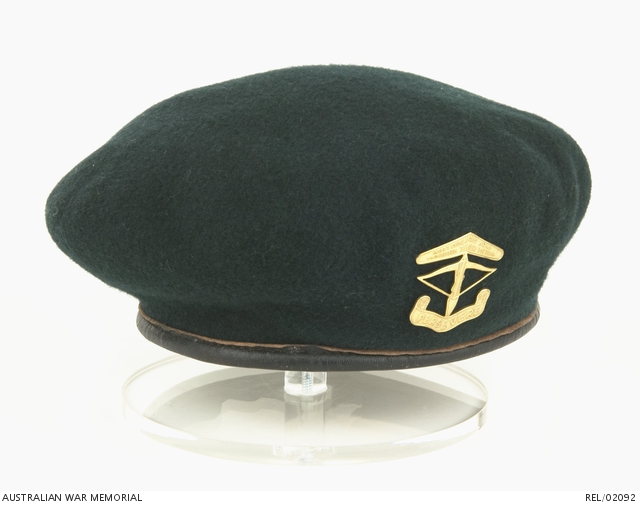 Rifle green wool beret, size 7 1/8, with black leather headband and two black metal eyelets inserted in the right hand side. The black cotton lining is stamped in white with the maker's details. An unofficial Vietnamese manufactured Australian Army Training Team Vietnam brass badge is attached to the front. The badge features a crossbow surmounted by a boomerang containing the words 'AUSTRALIAN ARMY TRAINING TEAM VIETNAM'. Below the crossbow is a scroll containing the word 'PERSEVERE'.

Worn in Vietnam by 335119 Major David Edward Holford when he was a member of the Australian Army Training Team (AATTV), Vietnam. Major Holford served with Headquarters, 1 Australian Task Force from 4 May 1966 to 31 May 1967 and with the AATTV from 4 June 1972 to 20 December 1972. During his second tour, Major Holford acted as Supervisor of Training. When the AATTV was finally withdrawn from Vietnam, the then Commanding Officer, 337629 Lieutenant Colonel Peter Johnston returned to Australia earlier than the remainder of the Team, so as second in command it was Major Holford's duty to organise their withdrawal from Van Kiep and his 'dubious honour' to disband the unit on its return to Australia. He wore the AATTV beret and badge during his latter service at the Jungle Warfare Training Centre, Phuoc Tuy Province. The green beret and badge was adopted in 1971 when the Australian advisors were consolidating in the province, although it had been worn by other advisors in previous tours.