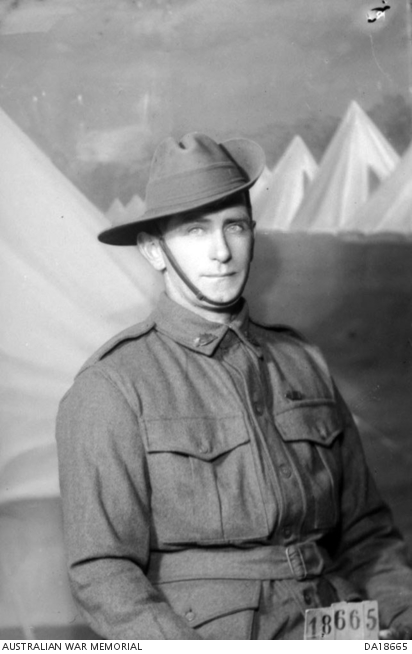 Studio portrait of 7605 Private (Pte) William Thompson Serjeant. A labourer from West Brunswick, Victoria prior to enlistment Pte Serjeant had previously served as a Shoeing Smith with the 5th Victoria Mounted rifles during the Boer War. He embarked with the 25th Reinforcements, 14th Battalion from Melbourne on HMAT Nestor on 21 November 1917. Later promoted to Lance Corporal he was awarded the Military Medal “For conspicuous gallantry and devotion to duty…his work throughout the whole enterprise was marked for its skill, coolness and resourcefulness while his personal bravery was beyond all praise.” He returned to Australia on 21 March 1919. This is one of a series of photographs taken by the Darge Photographic Company which had a concession to take photographs at the Broadmeadows and Seymour army camps during the First World War. In the 1930s, the Australian War Memorial purchased the original glass negatives from Algernon Darge, along with the photographers’ notebooks.