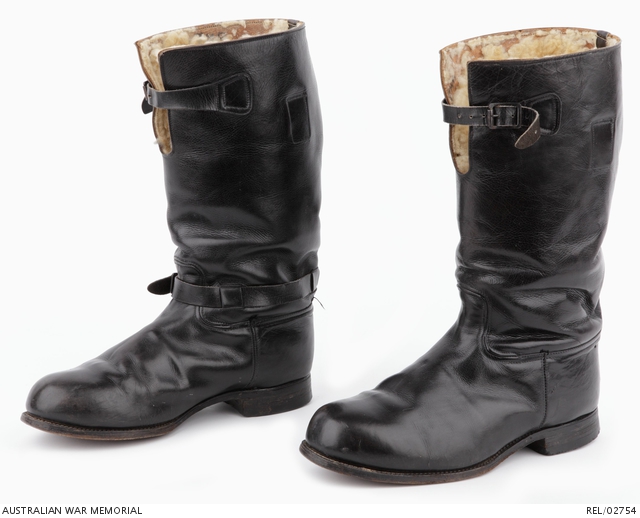 A pair of black leather 1936 pattern flying boots. The upper section of each boot features an adjustable strap which is fastened by a buckle. The inside upper portion is lined with natural cream coloured lambs wool. Inside each boot is a pair of leather pull tabs, one side carrying the maker's stamp, 'MADE BY BEDGGOOD MELBOURNE, AUSTRALIA', and the other printed with 'SIZE 9 / FITTING 10'. Around the ankle of the right boot is a black leather strap held in place by two loops on the inner side of the ankle and fastened by a black metal buckle. The soles are black leather and the heel is composed of rubber with the imprint of 'D / Dunlop' central.

Associated with the service of 404649 Alan Wollaston Bowman, born on 23 April 1914 in Boonah, Queensland. Prior to the outbreak of the Second World War, Bowman was working as a shipping clerk in Brisbane. He had served in the Militia as a gunner with the 42nd Battery, Australian Field Artillery from 1934 to 1939. Aged 24, Bowman enlisted as an airman in the RAAF on 11 October 1940. After initial training at Bradfield Park, he continued training at 8 Elementary Flying School, Narrandera, New South Wales, where he was mustered as a pilot. Due to the unauthorised absence of his instructor, Bowman was unable to complete his training to qualify as a pilot and was remustered as a navigator. He travelled to Canada in March 1941 for further training as part of the Empire Air Training Scheme (EATS).

Bowman was commissioned on 15 September 1941 and appointed pilot officer. In October he travelled to the United Kingdom and spent several months in an operational training unit before being posted to 455 Squadron, RAAF in March 1942. The squadron was equipped with Handley Page Hampden medium bombers and initially joined RAF Bomber Command, later transferring to Coastal Command in late April.

The role of Coastal Command was to protect British naval supply lines and convoys from attack by German warships, U-boats and aircraft as well as carrying out offensive attacks on German shipping. 455 Squadron's Hampdens were converted to torpedo bombers and undertook anti-shipping attacks off the Norwegian Coast from their base at Leuchars in Scotland.

In early September Bowman was posted to Russia when the squadron was deployed as part of Operation Orator to protect convoy PQ 18 which was expected to come under enemy attack. The convoy consisted of 40 merchant vessels carrying essential supplies through the Arctic from Scotland to Archangel in Russia.

On 14 September Bowman was aboard one of 23 Hampdens which conducted a reconnaissance mission over the Barents Sea looking for the German battleship Tirpitz which was believed to be in the area and posed a threat to the safety of the convoy. The Tirpitz was not sighted but the convoy was attacked by the Luftwaffe and U-boats and 13 merchant vessels were lost.

455 Squadron remained at their base at Vaenga near Murmansk in northern Russia for several weeks. Located only 50 kilometres from the eastern front the area was a frequent target for air attacks. On 27 September two Junkers Ju88 aircraft bombed the airfield. A patrolling Russian Yak fighter dived from 9000 feet to intercept them and anti aircraft batteries opened fire. A shell hit the Yak blowing off its tail and forcing the pilot to bail out and parachute to safety. The aircraft crashed into the three storey RAAF officers barracks which caught on fire. Luckily, no one was injured as upon hearing the approaching aircraft, those inside fled to a nearby shelter. Bowman, who was doing his laundry at the time, later retrieved a flattened bucket and his damaged towel (REL/02726) from beneath the wreckage.

The RAF decided that 455 Squadron would hand over its Hampden's to the Russians and Bowman returned to Scotland aboard HMS Argonaut on 29 October. The squadron was re-equipped with Hampdens and resumed anti shipping operations from Leuchars in December. Bowman was posted to 1 Torpedo Training Unit on 20 February 1943. He completed a staff navigator's course and went on serve in the Middle East with 294 Squadron RAF and 78 Operational Training Unit. Bowman returned to Australia at the end of 1944 and served as a navigation instructor at Bairnsdale, Victoria. He was discharged from the RAAF on 17 October 1945 with the rank of flight lieutenant.