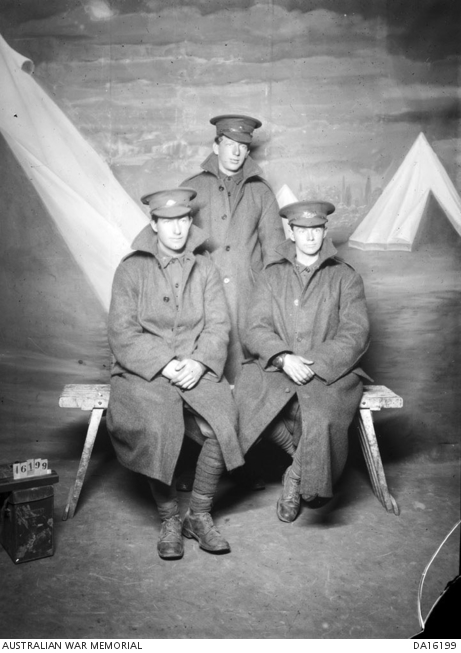 Studio portrait of three Australian soldiers of the 57th Battalion, all from Bridgewater, Victoria who all enlisted on 20 June 1916. All embarked for overseas with the 5th Reinforcements from Melbourne on 25 September 1916 aboard HMAT Shropshire. Identified on the left is 2443 Private (Pte) Percival Cecil Lucas, a 24 year old grocer who served in France and Belgium and died of pneumonia on 9 December 1918 in England.[See image DA16196.] Standing at the back is 2532 Pte Thomas Sloan Stewart, a 23 year old farmer who served in France and Belgium and returned to Australia on 30 April 1919. [See image DA16198.] On the right is 2515 Pte Kenneth Leigh Gordon Wylie, a 22 year old saddler who served in France before he took ill with bronchitis and was evacuated to England for medical treatment in April 1917. After returning to Australia on 13 November 1917, he was discharged a month later as medically unfit for further service. [See image DA16197.] This is one of a series of photographs taken by the Darge Photographic Company which had the concession to take photographs at the Broadmeadows and Seymour army camps during the First World War. In the 1930s, the Australian War Memorial purchased the original glass negatives from Algernon Darge, along with the photographers' notebooks. The notebooks contain brief details, usually a surname or unit name, for each negative.