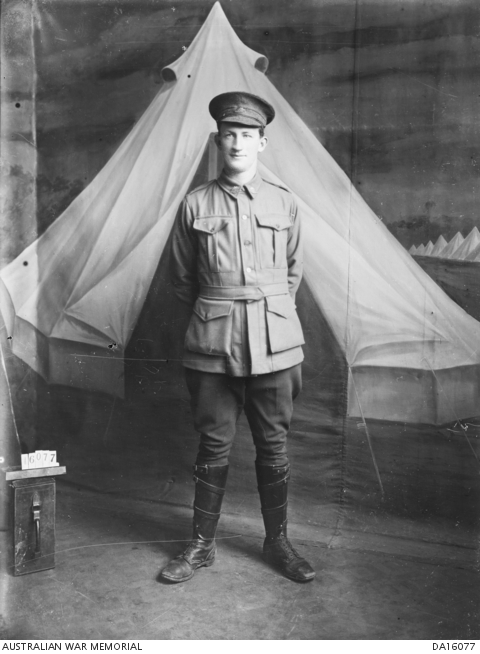 Studio portrait of 13834 Driver James John Charity, Australian Army Service Corps from Gobarup via Wanalta, Victoria. A 25 year old blacksmith prior to enlisting on 7 July 1916, he embarked for overseas with the Reinforcements from Melbourne on 16 December 1916 aboard HMAT Medic (A7). Following further training in England, he joined the Service Corps in France in October 1917 and was promoted to Artificer. After serving with the 4th Australian Divisional Mechanical Transport Company from March 1918, he arrived back in Australia on 10 March 1919. This is one of a series of photographs taken by the Darge Photographic Company which had the concession to take photographs at the Broadmeadows and Seymour army camps during the First World War. In the 1930s, the Australian War Memorial purchased the original glass negatives from Algernon Darge, along with the photographers' notebooks. The notebooks contain brief details, usually a surname or unit name, for each negative.