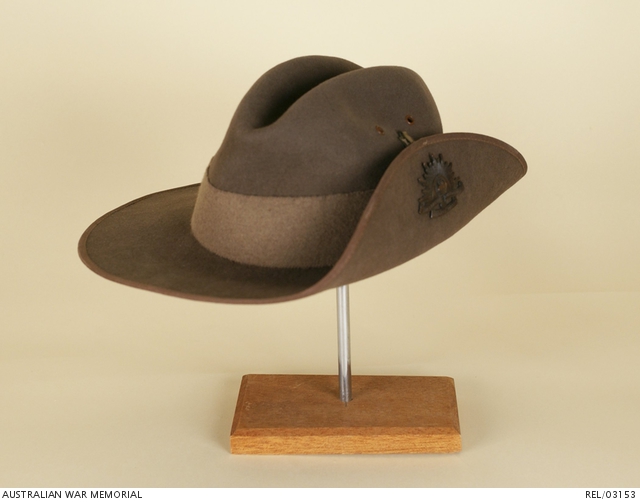 Australian Army khaki fur felt slouch hat complete with khaki woollen puggaree, brown leather chin-strap and oxidised brass General Service Badge. There is a pair of small brown eyelets in both sides of the crown. The maker's name, date of manufacture and size are impressed in the headband adjacent to the badge. There is writing (illegible) on the maker's mark.

The most distinctive article of clothing worn by the Australian soldier was the khaki felt slouch hat. This item of headwear had been worn in Australia for some years before the turn of the century and was also popular elsewhere in the world. A similar hat was worn by the New Zealanders, the Canadians, the US Army, the Ghurkhas, and even the colonial German troops during the First World War, but it is the Australians with which it will probably always be most strongly identified.

In March 1916 Tuckerman was transferred to the 2nd Pioneer Battalion and served with that unit for the remainder of the war. Pioneer battalions supported both the engineers by performing tasks which did not required specialist equipment, such as trench building, maintenance of roads and railways. They were also able to support infantry battalions by fighting in the front line when required. Tuckerman returned to Australia on 30 April 1919 aboard HMAT Kashmir, and was discharged from the AIF two months later.