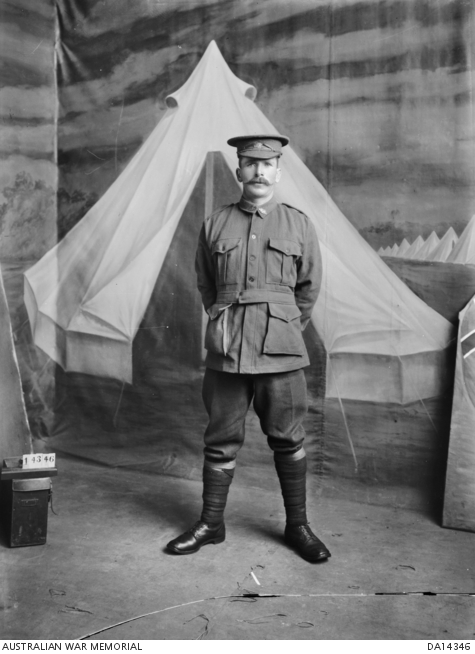 Studio portrait of 5131 Sapper (Spr) Michael Joseph Breen 2nd Australian Tunnelling Company. A labourer from Turner's Marsh, Tasmania, prior to enlistment on 31 January 1916, he embarked from Melbourne aboard HMAT Armadale on 19 July 1916 for England. Spr Breen joined his unit on the Western Front, France on 5 December 1916. He was hospitalised from 15 August 1917 to 29 October 1917 suffering from shell shock. In June 1918 Spr Breen was again hospitalised suffering from a mental condition. He was initially evacuated to England for assessment before being returned to Australia for discharge, medically unfit, on 2 November 1918. This is one of a series of photographs taken by the Darge Photographic Company which had the concession to take photographs at the Broadmeadows and Seymour army camps during the First World War. In the 1930s, the Australian War Memorial purchased the original glass negatives from Algernon Darge, along with the photographers' notebooks. The notebooks contain brief details, usually a surname or unit name, for each negative.