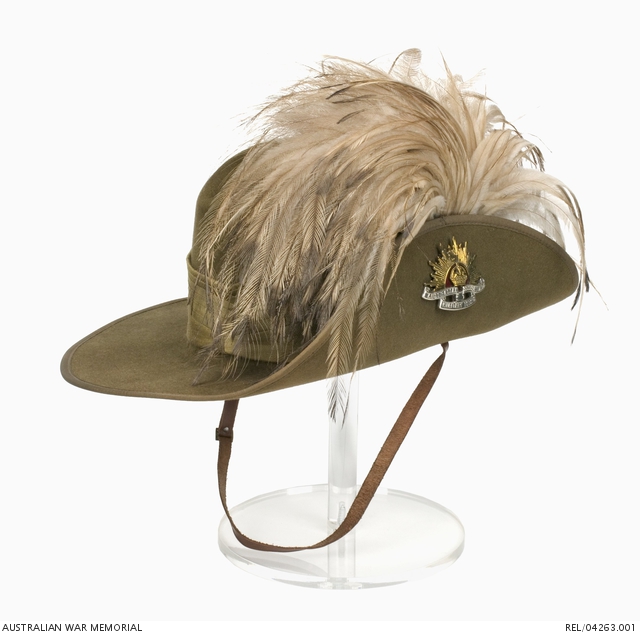 Khaki fur felt slouch hat with brim bound with khaki cotton grosgrain ribbon, a khaki polished cotton five-fold puggaree and a pair of ventilation eyelets on either side of the crown. The left brim turn up supports an emu feather plume and carries a pre-World War One Staff Corps gilded brass, silver and red enamel Rising Sun hat badge. The hat has a brown leather chinstrap with brass slide for adjustment; the leather sweatband is stamped 'HATCRAFT PTY. LTD. 1934 6 3/4'.

Slouch hat worn in England during General Sir Harry Chauvel's visit to London in 1937 as leader of the Australian contingent at the coronation of King George VI. He is thought to have chosen to wear the earlier pattern Staff Corps badge on the hat for its greater decorative effect.

Born in 1865, Harry Chauvel served in the Boer War as a Major in the Queensland Mounted Infantry. He later assisted in the establishment of the Royal Military College, Duntroon. In 1914 he commanded the 1st Light Horse Brigade. After serving at Gallipoli, Chauvel led the Light Horse across the Sinai and received his knighthood after the battles of Magdhaba and Rafa in December 1916 and January 1917. Chauvel was the first Australian to command a corps and in 1917 and 1918 his Desert Mounted Corps assisted the British army in driving the Turks from Palestine. Chauvel was chief of the Australian general staff from 1923 to 1930 and in 1929 was the first Australian to become a full general. He retired from the army in 1930. In 1940, aged 75, he was recalled to duty and appointed Inspector-General of the Volunteer Defence Corps. He died in 1945.