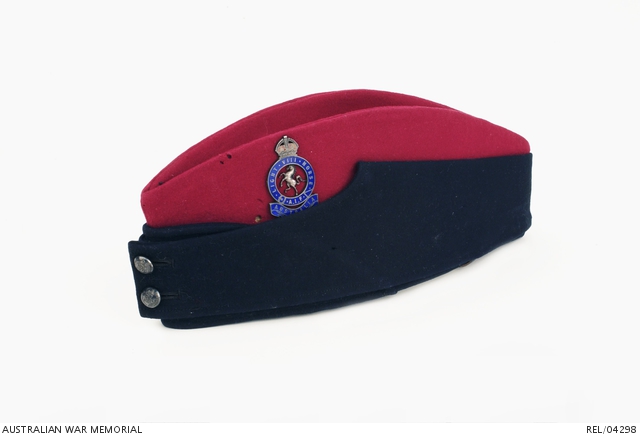 Australian Army Light Horse officer's blue and maroon wool full dress forage cap. The crown is maroon and the sides are technically blue but appear black. There is a pair of small blackened silver buttons on the front of the cap, that bear the cypher of George V surrounded by 'AUSTRALIAN COMMONWEALTH'.

A sterling silver and enamel unofficial badge, manufactured by Stokes & Sons, is attached to the left side near the front. It has a pair of lugs on the back and is held in place by a sprung brass pin, which passes through the hole in the end of both lugs, inside the cap. The badge is a circular garter of blue enamel containing the words 'LIGHT / VIII / HORSE / A.I.F.'. A rearing silver horse, in left profile, is in the central void of the garter. The garter is surmounted by a silver and red enamel crown, and below it is a blue enamel scroll containing the text, 'AUSTRALIA'.

There is a single black eyelet in both sides of the cap. It is lined with black polished cotton, and is complete with a thin leather chin strap that is black on the outward facing surface. The chin strap is not attached to the cap symmetrically. It runs from the midpoint at the bottom of the right side to a point about three quarters towards the rear of the left side.

Charles Arblaster was born at Pennyroyal, Victoria on 27 February 1895. He attended the Royal Military College, Duntroon, and graduated as a lieutenant, soon after the First World War broke out.

At the beginning of November 1914, Arblaster enlisted in the AIF at Broadmeadows, outside Melbourne, and was posted as a lieutenant to 8 Light Horse Regiment, part of 3 Light Horse Brigade. Initially placed in charge of a troop, he was almost immediately transferred to the command of the regiment's machine gun section.

After training, the regiment embarked for overseas service at Melbourne on 25 February 1915, aboard HMAT A16 Star of Victoria. Training continued in Egypt, until the regiment sailed for Gallipoli, where they landed in late May. Arblaster served with the regiment at Walker's Ridge in June and July, and his section supported it, during the charge at the Nek on 7 August. He then acted as adjutant until 7 September, when he was appointed acting captain and placed in overall command of the Brigade machine guns at the Table Top, immediately below Chunuk Bair. Here he received a bullet wound to the foot on 26 September and was evacuated to Malta, and then to England for treatment.

Arblaster was discharged from hospital in December and returned to Egypt in February 1916, where he briefly rejoined his regiment, before being promoted to captain and transferred to command D Company of the newly formed 53rd Battalion in March. The battalion moved to France for service on the Western Front, arriving there on 27 June. Sent to the front line on 10 July they subsequently took part in the disastrous battle of Fromelles on 20 July, in which the battalion suffered 625 casualties, or three quarters of its fighting strength.

Arblaster, who was severely wounded in the fighting, was captured by the Germans. He was treated at St Clothilde Military Hospital for Prisoners near Douai but died there of septicaemia, on 24 July, at the age of 21. He is buried in the Douai Communal Cemetery.

These caps were not part of official dress for 8 Light Horse Regiment. They, and the unofficial hat and collar badges, were privately made for officers only, at their own expense, before the regiment sailed for Egypt.