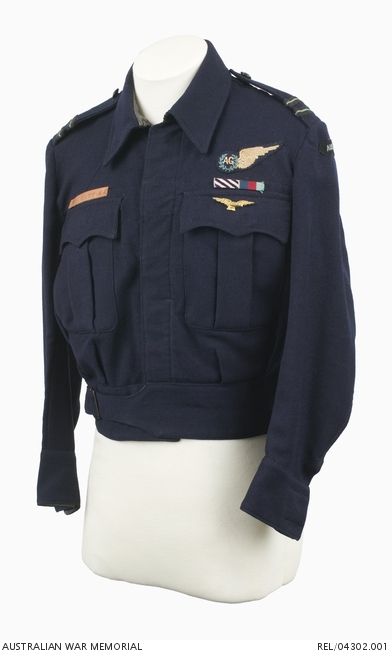 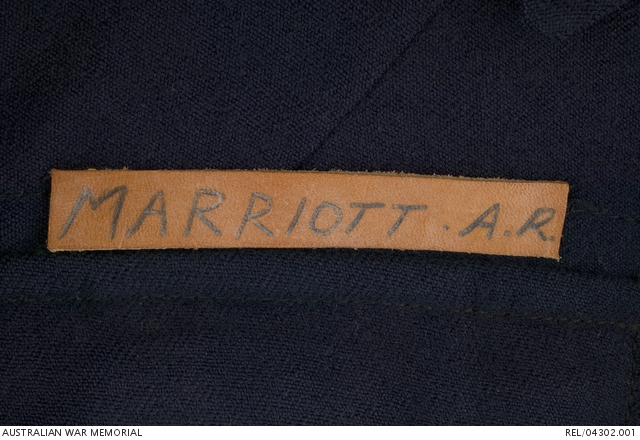 RAAF blue wool serge battledress blouse with fold down collar and two pleated patch breast pockets with concealed button closure. The blouse is fastened down the centre by five concealed black plastic buttons, and at the throat by a pair of metal hooks and eyes. The buttons fastening the pocket flaps have been removed and substituted by press studs on each side of the flap. The belted waist is gathered and fastened by an oxidised metal buckle on the proper right side. The cuffs of the sleeves are fastened by concealed buttons. The blouse has shoulder straps bearing the rank stripes of a flight lieutenant, and are secured by a black plastic RAAF buttons. Below the shoulder on each sleeve is an embroidered 'AUSTRALIA' title in pale blue cotton. Above the left hand breast pocket is an embroidered Air Gunner's qualification brevet (wing). Beneath it are medal ribbons for the Distinguished Flying Cross and 1939-45 Star. The left breast pocket flap bears a gilded brass eagle, indicating that the wearer is a Pathfinder. A leather strip bearing the handwritten name 'MARRIOTT. A.R.' is sewn across the top of the right breast pocket. The inside of the collar, cuffs, waist and placket are lined with blue cotton fabric. The fabric lining the rear waistband has two button holes for attachment to the battledress trousers. There is a side opening internal pocket on the left hand side. The body of the blouse is lined with black polished cotton; the sleeves are unlined.

Worn by Flight Lieutenant A R Marriott, RAAF, 35 (Pathfinder) Squadron RAF. Born on 22 December 1921 at Jerseyville, NSW, Alan Raymond Marriott trained as a laboratory assistant before enlisting in the Royal Australian Air Force (RAAF) on 3 February 1941. Marriott embarked at Sydney on 21 March 1941 for training in Canada with the Empire Air Training Scheme (EATS). Qualifying as a Wireless Operator/Air Gunner (WAG) and promoted to the rank of pilot officer in September 1941, Marriott continued on to the United Kingdom in January 1942. After further training he was posted to 279 Squadron RAF, an air-sea rescue unit equipped with Hudsons based at RAF Bircham Newton in Norfolk. Promoted to flying officer in March 1942, Marriott was posted to 200 Squadron RAF in Jeswang, Gambia, West Africa in July 1942, where he crewed Hudson bombers on convoy protection missions. He was promoted to flight lieutenant in September 1943. Posted to 35 Squadron RAF in July 1944 Marriott flew 30 missions in Lancasters as part of Pathfinder Force and was later awarded the Distinguished Flying Cross (DFC) for his 'Skill & [sic] fortitude in operations against the enemy'. Promoted to squadron leader in January 1945, Marriott returned to Australia in March of that year and was posted to the School of Administration at Victor Harbour. After four years of war service, 37 operational missions and 1,050 flying hours, Squadron Leader A R Marriott received his discharge from the RAAF on 7 January 1946. He was 24 years old.