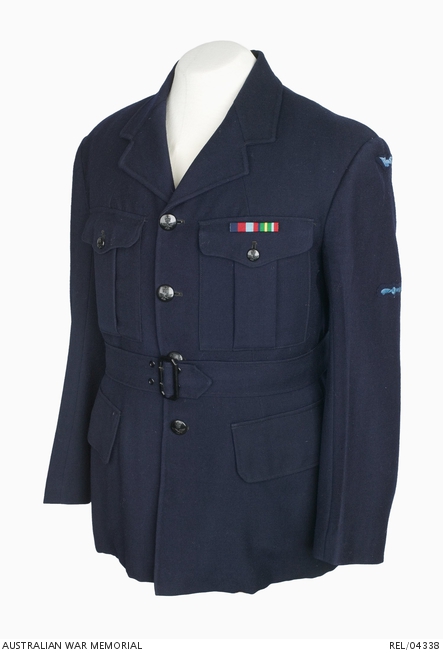 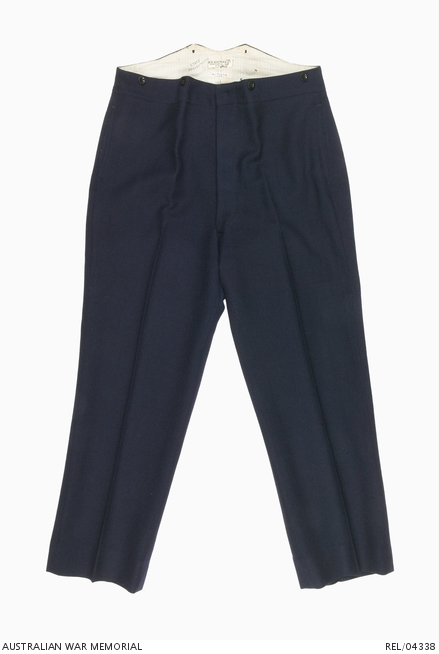 Airman's issue RAAF blue wool serge winter service dress tunic and trousers. The tunic is complete with plastic RAAF buttons, LAC rank insignia on each sleeve, a pair of embroidered RAAF shoulder titles and 3 red service chevrons on the lower right sleeve. The left breast carries a ribbon bar for the 1939-45 Star and the Pacific Star. A manufacturer's label sewn to inside is dated 1942. The trousers are equipped with plastic braces buttons and a have a button fly. A manufacturer's label is sewn to inner rear (HR HAYMAN Ltd, NEWCASTLE 1941). McClenaghan has penned his name and number extensively to the inside of both garments.

Worn by 67553 Leading Aircraftman Allan John 'Jack' McClenaghan during his Second World War service. McClenaghan was born on 14 February 1920 at Armidale, NSW and enlisted at Sydney on 15 July 1942. After almost a year's training at Shepparton, Victoria, and at the Technical College at Kingston, ACT, McClenaghan was assigned to 10 Squadron at Milne Bay as a Fitter 2E, servicing DAP Beauforts and the occasional DC3. He later moved with the Squadron to Nadzab and spent a total of 15 months overseas, suffering a few bouts of malaria along the way. He returned to Australia and was at RAAF Base Wagga at the end of the war. He was discharged on 19 March 1946.