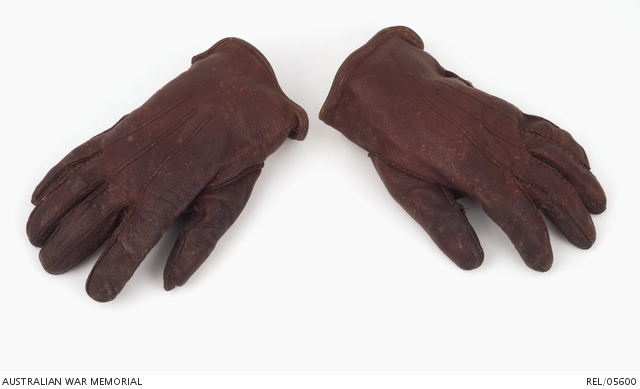 Pair of brown leather gloves with stitching around the thumb and between each finger. Three raised ridges are stitched in the leather down the centre of the back of each glove.

Worn with winter service dress by 424646 Flight Lieutenant Vernon Warwick Ashes, DFC. Ashes enlisted on 6 October 1942 and trained at Narranderra, NSW and then in Canada under the Empire Air Training Scheme. He qualified as a pilot and served with 101 Squadron, RAF, flying Lancasters as part of RAF Bomber Command. He flew 32 missions over Germany and occupied Europe, including 27 night and five day operations. He was awarded the Distinguished Flying Cross for 'Fortitude, courage and devotion on numerous operations'.