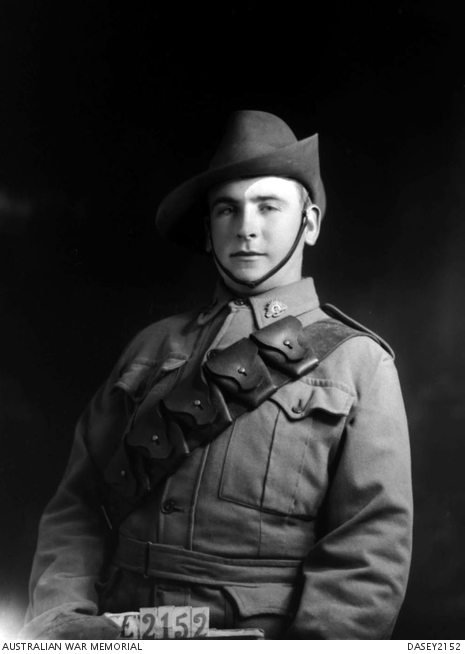 Studio portrait of 2759 Private (Pte) Patrick John O’Loughlin. A grocer from Warragul, Victoria prior to enlistment, Pte O’Loughlin embarked with the 6th Reinforcements, 22nd Battalion from Melbourne on HMAT Ulysses on 27 October 1915. Later transferring to the 59th Battalion he was evacuated to England suffering from frost bite and trench feet. Following his recovery he rejoined his battalion and was wounded in the abdomen and once again evacuated to England. After recovering he rejoined his battalion and was promoted to Corporal. On 10 August 1918 he was killed in action, and having no known grave, is commemorated on the Villers-Bretonneux Memorial. This is one of a series of photographs taken by the Darge Photographic Company which had a permit to take photographs at the Broadmeadows and Seymour army camps during the First World War. In the 1930s, the Australian War Memorial purchased the original glass negatives from Algernon Darge, along with the photographers’ notebooks.