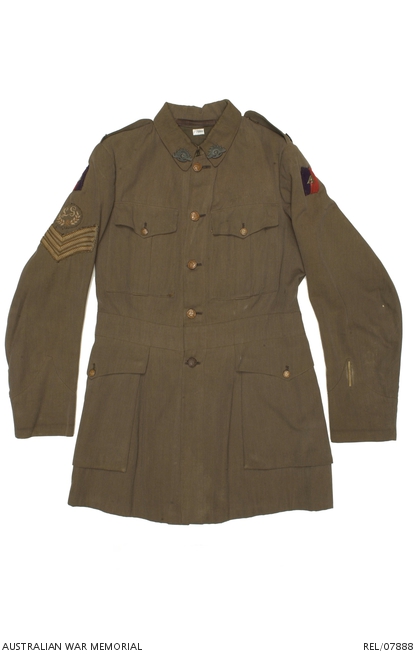 Australian Army Other Ranks pattern khaki wool/cotton gabardine twill single breasted tunic with stand and fall collar. The privately made tunic appears to be a composite of an officers and other ranks tunic. This is due to the pointed cuffs, single rear vent and pocket designs. There are oxidised brass Rising Sun (general service) badges at the front collar edges.The shoulder straps are secured to the tunic with small brown pressed leather buttons with a plaited pattern. Each carries a voided curved oxidised brass 'AUSTRALIA' title.

The tunic is fastened with five large pressed brown leather buttons; the collar is secured by two large brass hooks and eyes. The front of the tunic has four patch pockets with pointed flaps and brown pressed leather buttons. There are two box pleated breast pockets and two larger expanding pockets below the waistband. Press studs have been sewn onto the corners of the flaps on the breast pockets. A wide self fabric waistband is finished flush to the tunic edge and has a brass belt hook on each sides. It appears never to have carried the regulation central buckle.

The top of each sleeve carries a vertically aligned rectangular purple and red colour patch for 58 Battalion AIF. The purple section is of heavy ribbed wool rather than the standard issue wool flannel. Each patch has a brass ANZAC 'A's fitted to the centre. The right sleeve bears three khaki wool chevrons for the rank of sergeant. Above then is a khaki and cream embroidered Lewis Gunner's badge in the form of 'LG' within a wreath. Within the point of the left cuff is a wound stripe of gold Russia braid.

The tunic is fully lined with khaki cotton sateen and has a brown twill ribbon hanging loop on the inside collar. A small welt pocket has been let into the lining of the lower right side front panel.

James Hevey, born in St Helens, England in February 1881 was a labourer when he enlisted in the AIF on 14 June 1915 as a private , number 2477, and was allocated to the 8th Battalion. He stated that he had previously served in the West Divisional Engineers (possibly a British unit) for six years.

Hevey left Australia aboard HMAT A64 Demosthenes on 16 July 1915 and disembarked at Alexandria before joining his battalion as part of its 7th reinforcements at Shrapnel Valley, Gallipoli in early October. He contracted dysentery later in October and was evacuated to hospital in Malta for several months. He was discharged and returned to Egypt on 13 March 1916.

As part of the AIF's expansion and restructure, Hevey was transferred to the 59th Battalion on 26 March 1916, and then to the 2nd Training Battalion at Zietoun, Egypt. He was transferred again to the 58th Battalion on 4 April 1916 at Ferry Post. Hevey was promoted to lance corporal at the end of May 1916. On 23 June his battalion landed in Marseilles to join the British Expeditionary Force on the Western Front.

The battalion fought its first major battle at Fromelles on the 19 July, which was a complete disaster. The 58th had the dual role of providing carrying parties and acting as a reserve force. The reserves (approximately half of the battalion) were ordered to attack late in the battle and were virtually annihilated by German machine-gun fire; as a whole, the 58th suffered casualties equal to almost a third of its strength. Hevey survived but was wounded in August while his battalion was still in the Fromelles sector, and was transferred to England for treatment and rest. He was promoted to temporary corporal on 5 September. This rank was confirmed on 7 December, the day before he was promoted to sergeant.

Hevey rejoined his battalion in France, remaining with it until October 1917 when he transferred to the 15th Training Battalion in England. In early 1918 he was attached for duty as an instructor with the permanent cadre of the same unit. He also attended a Lewis Gun course at the Australian School of Musketry, Tidworth, in March 1918, and qualified 2nd class.

After various training duties with the 14th and 15th Training Battalions, Hevey rejoined his battalion in France on 4 August. He was gassed on 29 September, near Bellicourt during the battalion's final action of the war, and was transferred to the General Hospital in Oxford, England on 3 October 1918 for treatment. He was well enough to be discharged from No. 1 convalescent Depot on 17 December.

Hevey was discharged from the AIF on the 31 March 1919 and demobilised in England at his request. He had married in 1902 at St Helens in Lancashire and had emigrated to Australia ahead of his family shortly before the outbreak of war. Hevey was given permission to remain in England while his eldest daughter, who had won a scholarship, completed her schooling. The family arrived in Australia on the 22 January 1920.