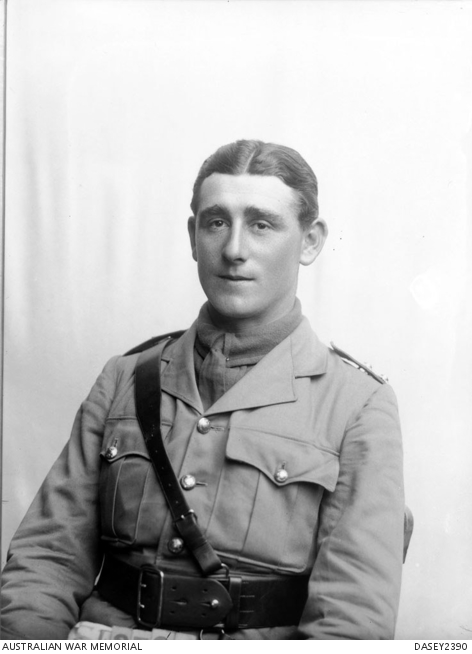 Studio portrait, probably of 19117 Sapper (Spr) Raymond Henry Webster Butcher , 2nd Division Signal Company shown here in the uniform of an officer of the militia prior to enlistment in the AIF. A hardware manager from South Yarra, Victoria, prior to enlistment he embarked from Melbourne aboard HMAT Themistocles on 4 August 1917 for Glasgow, Scotland. He served on the Western Front, France, and was transferred to the 3rd Division Signal Company. Spr Butcher was hospitalised due to illness on 12 July 1918 and was evacuated to England for treatment and recuperation until he was repatriated to Australia in December 1918 for discharge on 24 February 1919. This is one of a series of photographs taken by the Darge Photographic Company which had the concession to take photographs at the Broadmeadows and Seymour army camps during the First World War. In the 1930s the Australian War Memorial purchased the original glass negatives from Algernon Darge, along with the photographers' notebooks. The notebooks contain brief details, usually a surname or a unit name, for each negative.