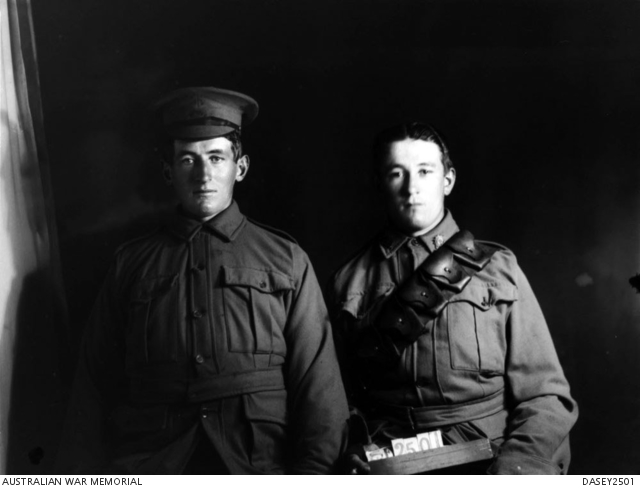 Studio portrait of Hamilton and Shaw. Private (Pte) J J Hamilton, on the left, also appears in image DASEY2500 but has not been further identified. Pte Shaw also appears in image DASEY2502 and is believed to be 3609 Private Thomas Benjamin Shaw, 24th Battalion from Collingwood, Victoria. A 22 year old brass finisher prior to enlisting on 22 July 1915, he embarked for overseas service with the 8th Reinforcements from Melbourne on 5 January 1916 aboard HMAT Afric. On arrival in Egypt, he transferred to the 8th Battalion and then to the 14th Battalion and embarked with the latter to the Western Front. He was killed in action near Armentieres, France on 3 July 1916 and is buried in the Brewery Orchard Cemetery, Bois-Grenier, France. His brother, 4789 Private Joseph Shaw served with the 21st Battalion on the Western Front and returned to Australia in April 1918. This is one of a series of photographs taken by the Darge Photographic Company which had a permit to take photographs at the Broadmeadows and Seymour army camps during the First World War. In the 1930s, the Australian War Memorial purchased the original glass negatives from Algernon Darge, along with the photographers' notebooks. The notebooks contain brief details, usually a surname or unit name, for each negative.