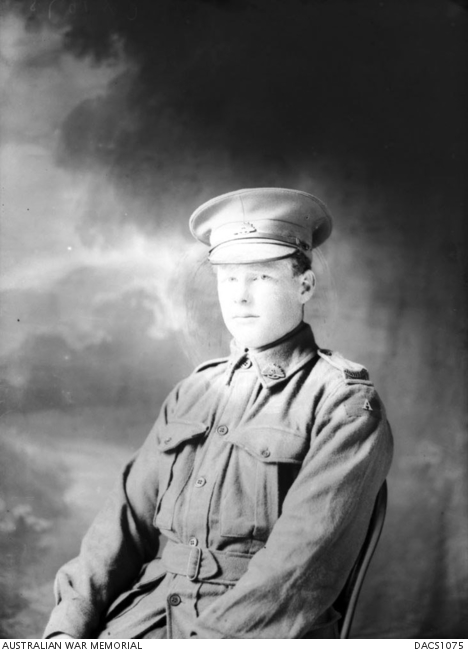 Portrait of S V D'Altera, probably 70 Private (Pte) Stanley D'Altera, a labourer and fitter and turner, of Yarraville, Vic. Pte D'Altera initially enlisted 13 January 1915 and was discharged on 8 February at the request of his parents who had not given permission for him to join the AIF. He re-enlisted on 18 February 1915 under the assumed name of William Arthur. He also used a brother's name, William D'Altera. He embarked from Melbourne as Stanley Victor D'Altera with A Company, 23rd Battalion, aboard HMAT Euripides (A14) on 10 May 1915. During his service he transferred to the 7th Battalion. He returned to Australia in May 1917. Stanley D'Altera also served in the Second World War. This is one of a series of photographs taken by the Darge Photographic Company which had a permit to take photographs at the Broadmeadows and Seymour army camps during the First World War. In the 1930s, the Australian War Memorial purchased the original glass negatives from Algernon Darge, along with the photographers' notebooks. The notebooks contain brief details, usually a surname or unit name, for each negative. The names are transcribed as they appear in the notebooks. See also DA08726.