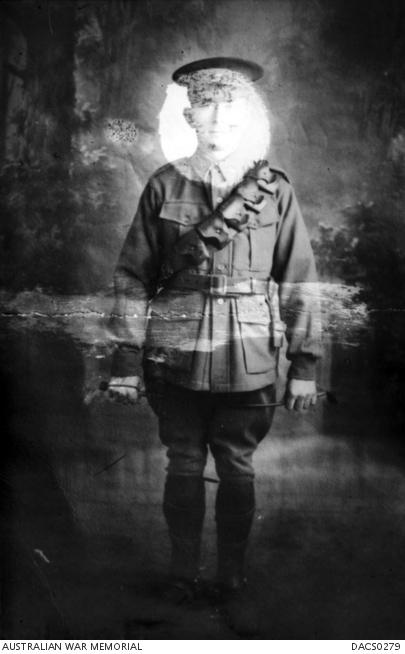 Portrait of Alf King copied for the Cobram Honour Roll. The soldier is probably Alfred Charles (Alf) King, son of William P and Christina (or Christenia) King and brother of 4527 Private (Pte) Archibald (Archie) King. The brothers were born in Mulwala, NSW. Alfred KIng, a horsebreaker from Clifton Hill, Victoria, enlisted under the alias 1792 Pte William Gothard. He embarked from Melbourne with the 2nd Reinforcements, 22nd Battalion, aboard HMAT Demosthenes (A64) on 16 July 1915. During his service Alfred transferred to the 6th Battalion. He returned to Australia on 9 March 1919. In 1920 he informed the Army that his real name was Alfred Charles King and that he had enlisted under an alias, his stepfather's name, for family reasons. During the war he wrote to his father in Barooga, NSW, under his real name, Alf King, The letter was published in the Cobram Courier newspaper. During the First World War the Cobram and District Soldiers Fund initiated a project to create a Cobram Honour Roll. It was to include portraits of servicemen who had links to the Cobram area. The Fund arranged for portraits to be copied by the Darge Photographic Company at its Collins Street Studio, Melbourne. Around 100 copy prints were supplied by the Darge company but it is not known if the roll was ever constructed. In the 1930s, the Australian War Memorial purchased original glass negatives from Algernon Darge, along with the photographers' notebooks. The notebooks contain brief details, usually a surname or unit name, for each negative. The names are transcribed as they appear in the notebooks.