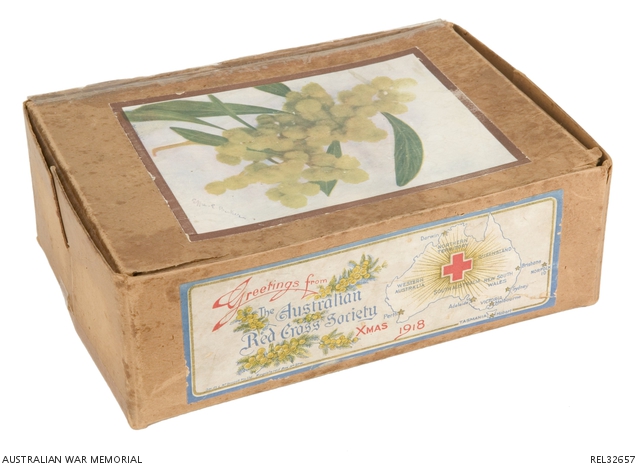 Brown cardboard box for a Christmas gift issued by the Australian Red Cross Society. The box opens at the top and has a colour label on the lid portraying a spray of flowering wattle. The front panel has a label showing a map of Australia with a large red cross at its centre. This label also shows sprigs of wattle with the words 'Greetings from The Australian Red Cross Society XMAS 1918'.

This Christmas box was collected in 1918 by John Patrick Kelly, a labourer from Murphy's Creek near Dunolly in Victoria. Aged 29, Kelly enlisted in the Australian Imperial Force on 21 June 1915. He sailed with 3 Reinforcements of 24 Battalion aboard HMAT Anchises in August 1915 and soon after joined his battalion on Gallipoli. During the evacuation in December Kelly was one of 16 men chosen to remain behind until the last moment in order to hold the right flank of Lone Pine under the command of Captain Stanley Savige. Kelly went on to serve on the Western Front with the rest of his battalion until severely wounded in action at Pozieres. He embarked for return to Australia on 16 October 1916.