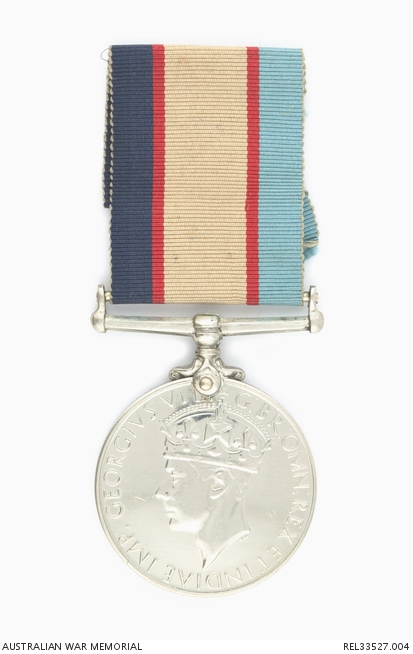 Australia Service Medal. Impressed around the edge with recipients' details.

Robert 'Robin' Potter was born in 1895 in Bairnsdale, Victoria. He was a twenty year old bank clerk in Wodonga, Victoria, when he enlisted in the AIF on 14 December 1914. Potter was assigned the service number 1670 and posted to the 3rd Reinforcements of 6 Battalion. He sailed for overseas service as a private aboard HMAT Runic on 19 February 1915. After training in Egypt he landed with his battalion on Gallipoli in early May 1915, where he remained until the evacuation in December 1915. Potter was promoted to corporal in May 1916 while serving in France, to sergeant in August 1918 and lieutenant in December 1918. He returned to Australia on 3 April 1919 and was discharged on 14 July. Potter's brother, Lieutenant Frank Hales Potter, died of wounds on 3 November 1917 while serving with 10 Machine Gun Company. Robert Potter enlisted again for service in the Second World War, serving first with 3 Reserve Battalion between December 1940 and January 1942, and then as a major with 8 Battalion Volunteer Defence Corps from March 1942 until October 1945.