Group portrait of the 23rd Reinforcements for the 10th Battalion. An Aboriginal serviceman, 7062 ... 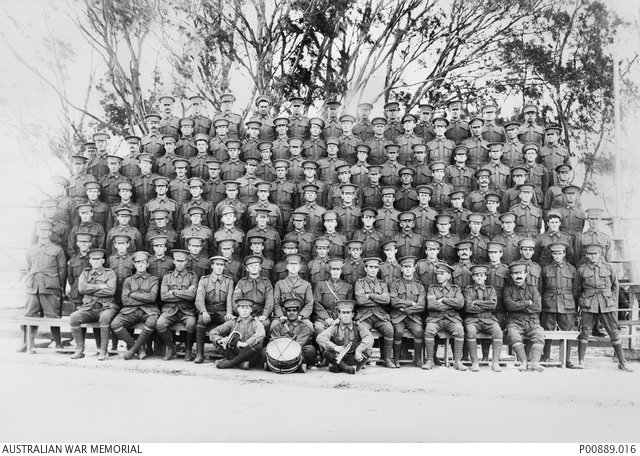 Group portrait of the 23rd Reinforcements for the 10th Battalion. An Aboriginal serviceman, 7062 Private (Pte) Ridgeway William Rankine is (probably) standing back row, far right. Permission for Pte Rankine to enlist in the AIF was granted by the South Australian Chief Protector of Aborigines and Pte Rankine embarked from Adelaide on board the troopship Berrima on 18 December 1916. After he arrived in England Pte Rankine was transferred to the 3rd Training Battalion before he embarked for France on 2 May 1917 to serve in the 10th Battalion. Suffering severe trench feet Pte Rankine was repriated to England for treatment on 19 October 1917. He re-joined the 10 Battalion on 12 January 1918. Pte Rankine was wounded in action on 28 June 1918 and saw no further action. He sailed from London for Australia on the troopship Ormonde on 16 June 1919. The soldier seated behind the drum is identified as 7036 Pte Cassim Mahomet, a vaudeville artist of Indian heritage.