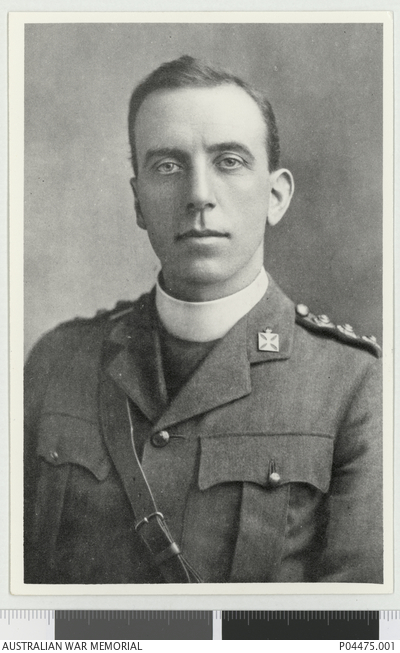 Studio portrait of 818 Father Michael Bergin, Chaplain 4th Class, of Melbourne, Vic (originally of Fagala, Cairo, Egypt), aged 35 years. Bergin is listed on the AIF embarkation Roll as having left from Melbourne aboard HMAT Ulysses on 10 May 1915. However his service record indicates he was in Cairo at the time of the landing of Gallipoli and was one of the very few and perhaps the only man to be attested at Anzac Cove. He was attached to the 5th Light Horse Regiment on Gallipoli on 12 May 1915, and served with that unit until 5 September 1915, when he was evacuated to Egypt and then to England suffering from enteric fever. He returned to the Middle East on 27 January 1916 and was appointed Chaplain to the 51st Battalion on 26 March 1916 at Tel el Kebir, Egypt. He proceeded with this unit to France on 5 June 1916. Father Bergin was posthumously awarded the Military Cross (MC) on 1 January 1918 for 'distinguished service in the field'. He was killed in action on 12 October 1917, at Zonnebeke, Belgium.