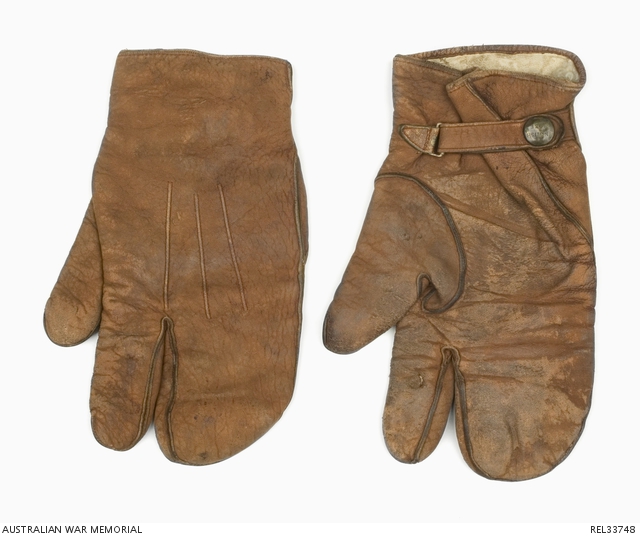 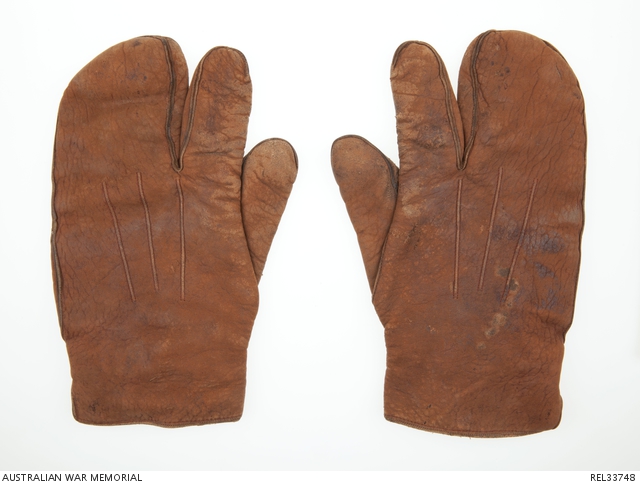 A worn pair of soft leather gloves with a partial woollen interior. The index finger is separated from the rest of the fingers, to allow the use of this finger in activities such as firing weapons and to pick up small objects. Stitched into the top of each glove are three straight decorative lines. The lower wrist of each glove has an adjustable leather band secured by a metal press stud. Stamped into each press stud is 'ENGLISH MAKE'. There is a small hole torn into the leather on the bottom of the right index finger. Hand sewn into the inside cuff of the left glove is a small white tag with the number '9.'.

Lawrie (also spelt Laurie) Arthur Harris enlisted in the Australian Imperial Force (AIF) on 18 February 1915 and served with 27 Battalion AIF. After serving at Gallipoli for a few months he was evacuated in December 1915. In March 1916 he embarked for Europe. In October 1916 he was sent to Sandhurst Military College in the United Kingdom for Officer training. This particular object links with Laurie Arthur Harris' service with the 27 Battalion. Upon graduation he was promoted to second lieutenant and posted to 28 Battalion AIF where he saw action on the Western Front.

On 3 May 1917 he was wounded at the Hindenburg Line, east of Bullecourt, but remained on duty. Although he was wounded early, he led two bombing parties and he later carried on his back a badly wounded officer when they were leaving the line. He was awarded the Military Cross in July 1917 for his actions at the Hindenburg Line. He was wounded again in October 1917 with a gunshot wound to his left leg and was admitted to hospital. He returned to Australia on 9 January 1919.

Non Government issued equipment such as these gloves were commonly bought by Australian soldiers while in the United Kingdom during the First World War. Sometimes there were insufficient supplies of Government standard issued equipment, or the issued equipment was found wanting or did not suit the individual well enough. Consequently during the war many civilian clothing manufacturers had a profitable industry in supplying the British Commonwealth and Dominion forces based in the United Kingdom with clothing or equipment.