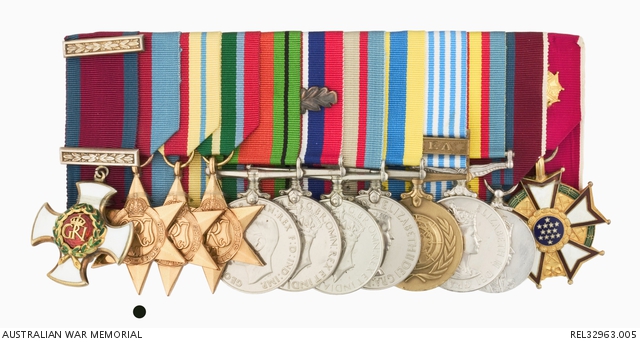 Thomas Joseph Daly, the son of First World War veteran Lieutenant Colonel Thomas Daly, was born in Ballarat in March 1913. He attended the Royal Military College (RMC), Duntroon from 1930 to 1934 and was commissioned into 4 Light Horse Regiment. He served with the British Army in India in 1938, and on the outbreak of war enlisted in the Second Australian Imperial Force. He was appointed adjutant of 2/10 Infantry Battalion and later promoted to brigade major of 18 Brigade, serving in the Tobruk and North African campaigns. After attending Staff School at Haifa in 1942 he was promoted to lieutenant colonel and appointed senior staff officer to 5 Australian Division. He served in New Guinea and Australia until he was appointed commanding officer of 2/10 Battalion, leading them in the Balikpapan invasion. In July 1945 he was appointed an Officer of the Order of the British Empire, and on 6 October 1945 was made a Companion of the Distinguished Service Order for his leadership at Balikpapan. After the war, Daly took up a number of staff appointments and also instructed at the Staff College, Camberley, in the United Kingdom, in 1946. After a period at RMC Duntroon, he was appointed temporary colonel in July 1951 and confirmed in this rank in May 1952. A month later he was posted to command 28 Commonwealth Brigade, a British and Australian composite unit which was fighting in Korea. Further senior commands followed his return to Australia, and in 1959 he was promoted to major general.In 1965 he was gazetted a Companion of the Bath for his contribution to the development of the Australian Army. In 1966 he became Chief of the General Staff with a promotion to lieutenant general. Daly was knighted June 1967. He retired in 1971. Between 1974 and 1984 he served as Chairman of the Australian War Memorial's Board of Trustees (later Council). Sir Thomas Daly died in Sydney in January 2004, aged 90.