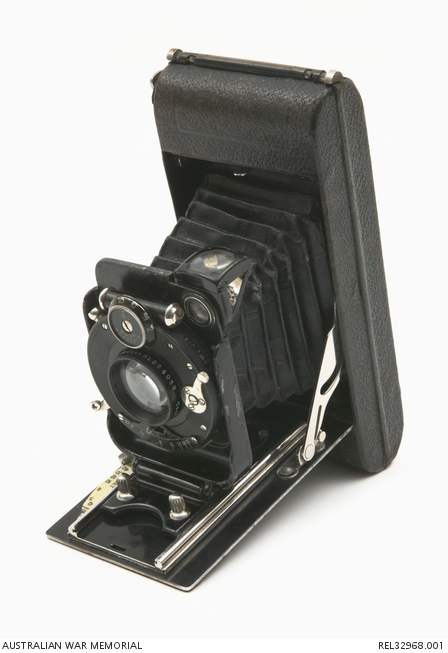 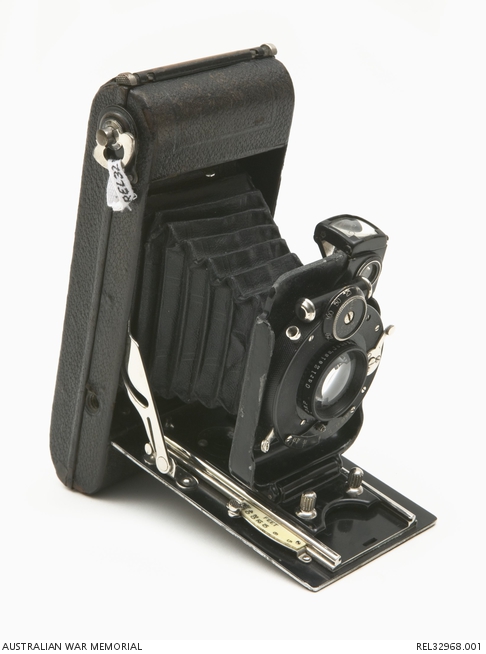 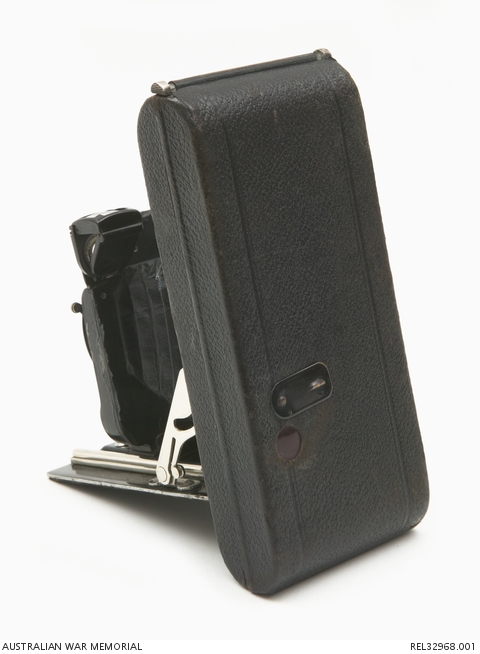 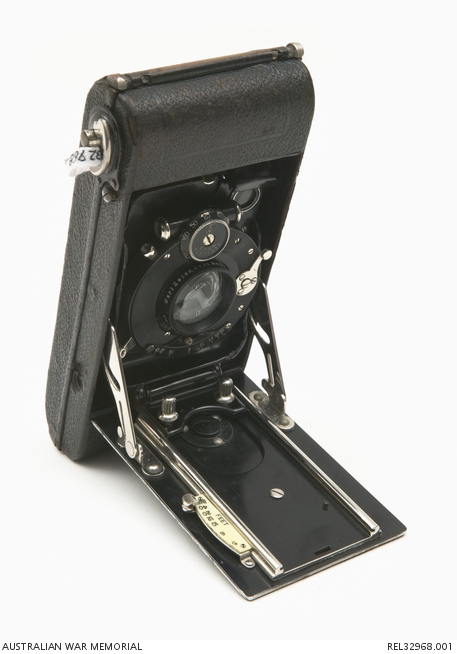 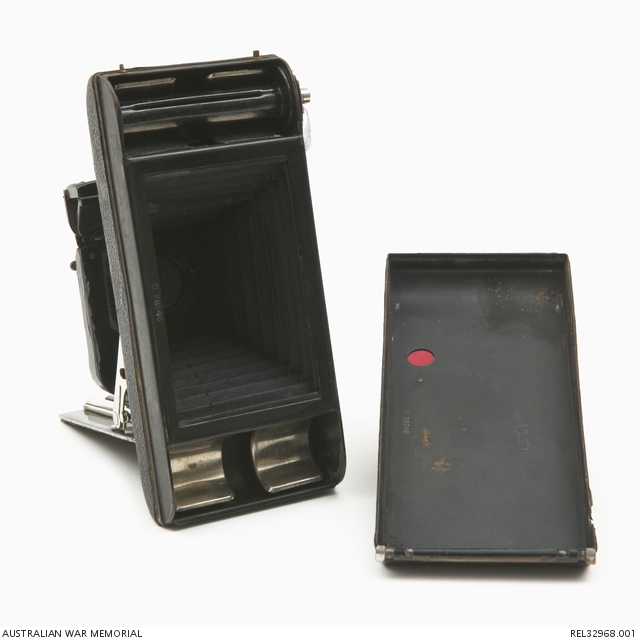 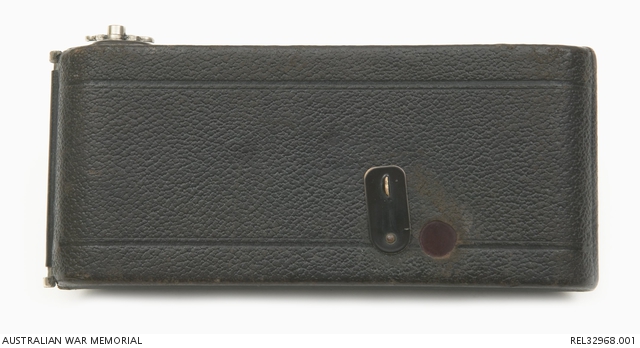 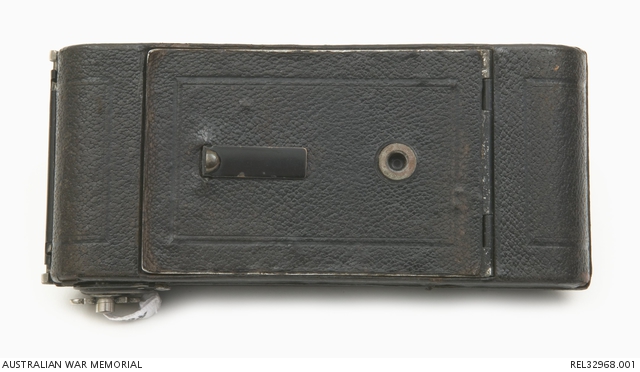 Rectangular folding camera. It has a steel body with rounded ends and is finished in black textured leatherette. The Carl Zeiss lens is mounted to a circular disc of black bakelite which is fitted to a blackened white metal plate. This white metal plate is connected to a collapsible black leather bellows which retracts back into the camera body when not in use. Around the lens are dials to adjust aperture and shutter speed, the shutter cocking lever and the shutter release button. A swivelling glass prismatic view finder allows photographs to be taken in landscape or portrait format. Fitted to the underside of the camera is a spool winder and clasp on the side to open and lock the camera body. An empty film spool is fitted to the inside of the camera. At the rear of the camera is a red coloured viewing window with a pivoting metal cover.

No maker's mark is visible on the camera, other than on the lens and shutter speed knob. The lens is marked 'Carl Zeiss , Jena Nr 234039 Tessar 1:4,5 FL 10.5 cm DRP'. The Bakelite disk to which the lens is mounted is marked 'D.R.P. Compound D.R.G.M.' The latter abbreviation stands for Deutsches Reichsgebrauchsmuster (registered design of the German Reich). Shutter speed control knob is marked also with DRGM and the patent number 371939. This knob is marked with a monogram of the letters D and F. The camera is similar in design to an ICA Icarette or to an Ensign Carbine.

This camera and case is associated with the service of James Pinkerton Campbell, born 12 July 1869 in Melbourne. 193 Private Campbell enlisted on 12 September 1914 and embarked from Melbourne for Alexandria on 25 February on board HMAT Star of Victoria.

He served initially as a signaller with B Squadron, 8 Light Horse Regiment, 3 Brigade AIF. In August 1915 Campbell was wounded in action at Russell Tops on 30 July 1915 in his right knee by a bomb and was evacuated to Alexandria on 13 August. Campbell transferred to the Australian Army Pay Corps on 1 December 1915 where he was promoted to corporal and given the new service number 137. He also received a promotion to sergeant in September 1916.

Campbell was transferred to the fledging Australian War Records Section (AWRS) based in Cairo in mid-December 1917, just before Frank Hurley, the official war photographer, arrived in Palestine. Campbell worked as Hurley’s assistant accompanying him and developing his plates. Campbell was appointed as Hurley’s replacement on 11 March 1918 in Jericho, and was attached to the Desert Mounted Corps in April 1918. He was responsible for the photographic record commencing in March until Chauvel reached Damascus and the end of the war against Turks. Hurley left the Desert Mounted Corps in early March 1918 and returned to England via Cairo in early May 1918. He died on 5 September 1935.

This camera is Campbell's personal camera. He took a substantial number of photographs recording the activities of the 8LHR from Melbourne to Gallipoli until he was wounded and evacuated. He produced a number of albums of his 8LHR photographs after the war. The Memorial holds a number of photographs taken with this camera and also holds a facsimile copy of the best album he produced, donated by Mr Justice Higgins as a commemoration of his son, an 8LHR officer, who survived Gallipoli only to be killed in Egypt in 1916. The camera case (see REL32968.002) is inscribed on the inside with Campbell's initials & regimental number: 'JPC 193 B.8 LH A.I.F.'.