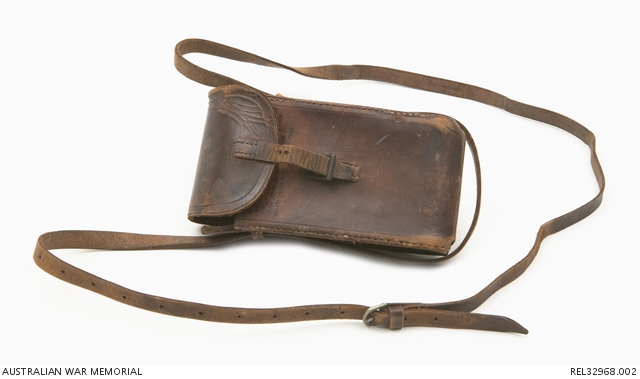 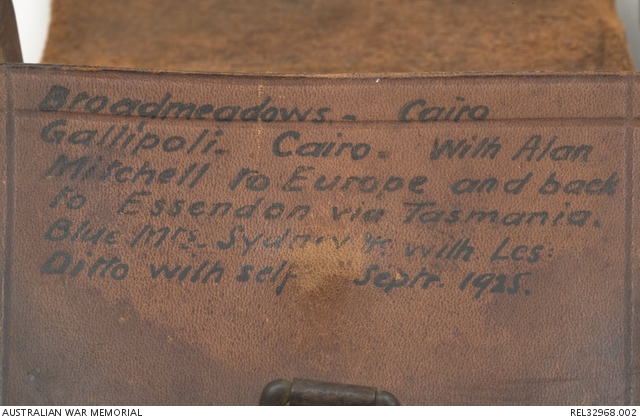 Rectangular brown leather case for a folding camera (REL32968.001). The case has an adjustable leather carry strap and a protective flap which is secured by a steel buckle. Written on the front of the flap is ‘JPC 193 B.8 LH` A.I.F.’. Underneath the flap is witten in black ink:

‘Broadmeadows. Cairo/ Gallipoli. Cairo. With Alan/ Mitchell to Europe and back/ to Essendon via Tasmania/ Blue Mts. Sydney [obscure] with Les: /Ditto with self Septr. 1925.’.

The case has no maker's marks.

This case and the camera it carried are associated with the service of James Pinkerton Campbell, born 12 July 1869 in Melbourne.

193 Private Campbell enlisted on 12 September 1914 and embarked from Melbourne for Alexandria on 25 February on board HMAT Star of Victoria. He served initially as a signaller with ‘B’ Squadron, 8 Light Horse Regiment, 3 Brigade AIF.

A photograph of Campbell standing on the top of one of the pyramids is held by the AWM at H02068. The camera case may clearly be seen on Campbell's left side.

In August 1915 Campbell was wounded in action at Lone Pine in his right knee and was evacuated to 1 Australian Base Hospital at Heliopolis. Campbell transferred to the Australian Army Pay Corps on 1 December 1915 where he was promoted to corporal and given the new service number 137. He also received a promotion to sergeant in September 1916. In December the following year, Campbell was detached for pay duties with Headquarters, Desert Mounted Corps and soon rejoined the Desert Mounted Corps in Cairo. In March 1918 Campbell was appointed official photographer for the AIF and Egyptian Expeditionary Force (EEF) and promoted to honorary lieutenant. Campbell departed Suez for Australia in January 1919 and his honorary commission was terminated on 18 April 1919. He died on 5 September 1935.

The inscription on the case is about the camera's journey. JP Campbell took photographs with it in camp at Broadmeadows, on the ship on the way to Egypt, in Cairo and on Gallipoli, where he was wounded just prior to the charge at the Nek, which he witnessed. Alan Mitchell is mentioned in a postcard written by JP Campbell to Lilian Pitts while Campbell was in hospital in Heliopolis in late 1915 recovering from his wound. Campbell states: Nephew Allan Mitchell was out again and brought me one of my films developed. He asked Mitchell ‘to hunt up the books’ and let him know the whereabouts and health of his friend since his teenage years, Aubrey Liddelow. These ‘books’ were Pay Corps records, as Mitchell was in the Pay Corps.

Alan Robert Mitchell was twenty-three years of age (born 24 September 1891 in Daylesford, Victoria) and a clerk on the Railways when he enlisted in Melbourne on 19 February 1915. He departed for war on the Runic on 25 February 1915, the troop ship accompanying the Star of Victoria, which carried JP Campbell and the rest of the 8th Light Horse. In Egypt he was attached to the Australian Army Pay Corps. His father was Robert James Mitchell, a stationmaster with the Victorian Railways. His mother, Jane Laurie (nee Johnston) was Margaret Campbell’s sister, wife of JP Campbell’s brother, William Burne Campbell, hence JP Campbell’s reference to ‘nephew’ on the postcard.

Alan Mitchell left Cairo for England in May 1916, still in the Pay Corps, and eventually ended up at the front in France in 1918 where, as a Lieutenant, he was twice mentioned in dispatches. The AWM has a group photograph (ID Number E02419) of the Headquarters Staff of the 4th Division at Allonville, 29/5/1918 with Lt A.R. Mitchell listed as one of those in the photo.Whilst in England Alan Mitchell married Winifred Isobel Browne, a theatrical performer, on 4 February 1918. He returned to Australia with his wife in 1920, and his army appointment was terminated on 11 August 1920. They went to Launceston in Tasmania where Winifred’s sister had settled, intending to do the same, but decided against it and settled in Essendon instead, a north western suburb of Melbourne, where Alan’s older brother Cyril (also a railway worker) had moved around 1919. This explains the ‘back to Essendon via Tasmania’ line in the inscription on the camera case.

J P Campbell had either given or sold his Gallipoli camera to Alan Mitchell who had taken it to Europe, returned with it to Australia and later given it to ‘Les’, who was most likely Les Mitchell, a cousin of Alan’s, according to Marion Souter, Alan Mitchell’s daughter. J P Campbell was living and working in Yallourn, Victoria, in 1925: perhaps he went on a holiday to Sydney and the Blue Mountains in September of that year with Les, or saw Les, and took the camera back from him, hence the ‘ditto with self’? Alan and Winifred Mitchell moved to Nunawading in the mid 1950s. Alan, who continued to work as a clerk in the railways between the two world wars in which he served, died on 18 June 1977, aged 85 years, at Montrose. His wife predeceased him on 5 November 1974.