Group portrait of 73 men of the 47th Battalion at Hastiere. Handwritten on the photograph are the ... 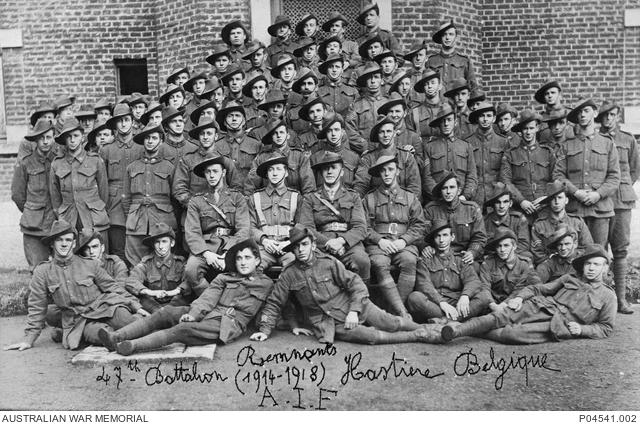 Group portrait of 73 men of the 47th Battalion at Hastiere. Handwritten on the photograph are the words “Remnants 47th Battalion (1914-1918) Hastiere, Belgique. AIF”. On the back of the photograph is a message “From Bert with best wishes to all”. Also written on the back probably at a later date is “10.4.18 1100 soldiers in 47th Battalion. Approx 73 left”. Identified are 3162 Private Herbert James Kingston (second from right, front row seated) and probably 4409 Charles Gibert Smith (centre of group with large moustache).The 47th Battalion was raised in Egypt on 24 February 1916 as part of the "doubling" of the AIF. Approximately half of its new recruits were Gallipoli veterans from the 15th Battalion, and the other half, fresh reinforcements from Australia. Reflecting the composition of the 15th, the new battalion was composed mostly of men recruited in Queensland and Tasmania and was incorporated into the 12th Brigade of the Australian Division. Arriving in France on 9 June 1916, the 47th Battalion entered the trenches of the Western Front for the first time on 3 July 1916. It participated in its first major battle at Pozières. Initially, the battalion provided working parties during the 2nd Division's attack on 4 August, and then, with its own division, defended the ground that had been captured. Due to heavy casualties suffered over the next few years, particularly in 1918, and a lack of reinforcements from Australia, three brigades were directed to disband one of their battalions to reinforce the other three. The 12th Brigade was one of these, and on 31 May 1918 the 47th Battalion was disbanded. The remaining members transferred into the 45th, 46th and 48th battalions. During the months after the Armistice the 45th, 46th and 48th battalions marched through northern France and into Belgium and were billeted in and around towns such as Hastiere.