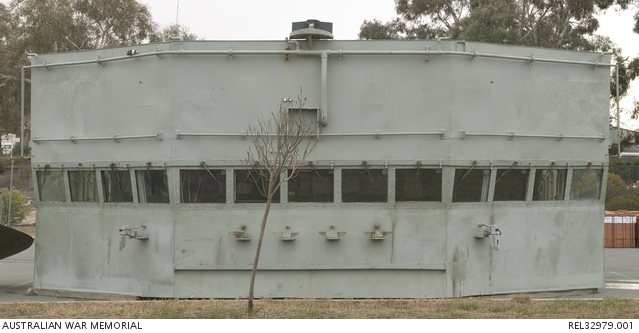 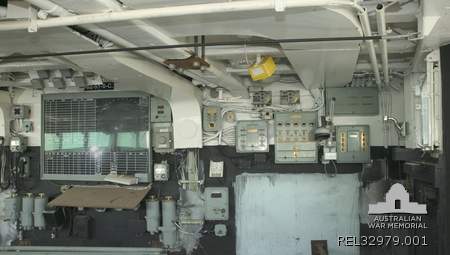 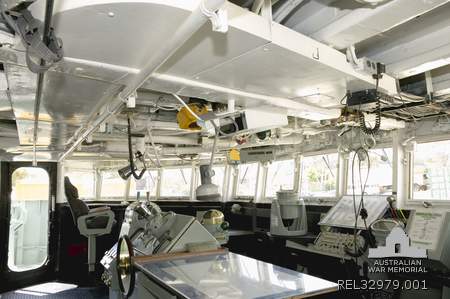 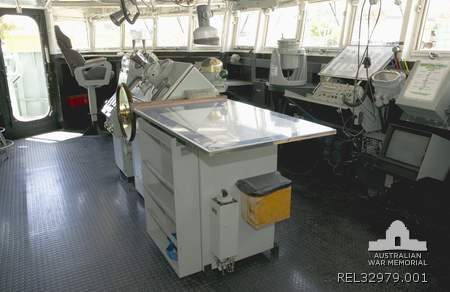 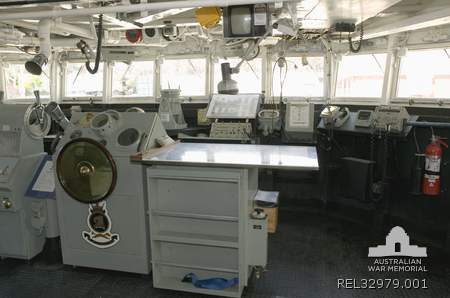 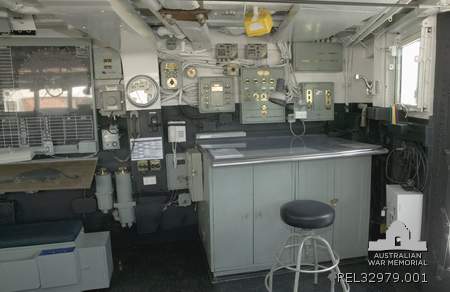 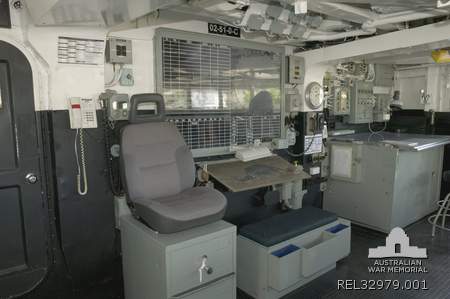 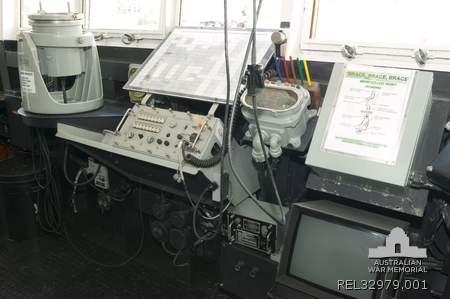 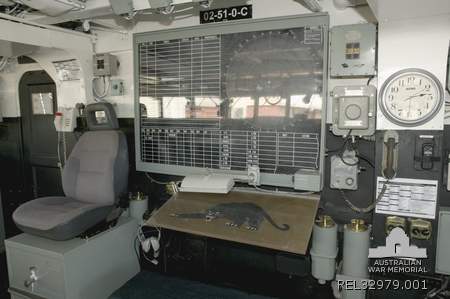 Bridge from the HMAS Brisbane. The bridge unit consists of an irregular 10-sided room, made of sheet alloy 7mm thick (approx). The front of the bridge has 13 square Perspex windows. On the left and right side of the bridge is a hinged entry door secured by dog latches. There is another door situated on the back wall. There is a railing around the top roof section of the bridge.

The bridge was removed from HMAS Brisbane after the ship was de-commissioned in 2001. The bridge is the control and command centre for the ship. HMAS Brisbane [II] was commissioned into the Royal Australian Navy in December 1967 and was the second vessel of that name to serve in the RAN. Known officially as DDG-41, Brisbane was the third of the RAN's American-built "Charles F. Adams" class guided-missiles destroyers. This class were the first major Australian warships designed and built in America, and were constructed by the Defoe Shipbuilding Co. The original complement of the Brisbane was 20 officers and over 300 sailors. Main armament was two 5-inch/54 calibre guns and anti-submarine torpedoes. The Ikara missile system was subsequently added. In later service the ship was known by the nick-name 'the Steel Cat'. HMAS Brisbane saw operational service in two conflicts. During the Vietnam War the ship undertook two tours of duty with the United States Seventh Fleet, in 1969 and again in 1971. The ship's major task was to provide gunfire support for the land campaign. During the Gulf War (1990-91), Brisbane was one of four Australian warships to serve a tour in Gulf waters. The Brisbane arrived in the Gulf in December 1990 and operated there until March 1991, performing a number of roles. Apart from contributing to the anti-aircraft defences in the carrier screen, the ship also kept watch for mines and ensured that small civilian craft kept well away from the carrier group. Later, during Operation Desert Storm, the Brisbane controlled fighter combat air patrols and tanker aircraft. The ship's final role was as an escort for US replenishment ships. In 2003 HMAS Brisbane was retired from service in the Royal Australian Navy. The Brisbane was the last steam powered ship in the RAN. HMAS Brisbane was sunk as a recreational dive wreck off the coast of southern Queensland in July 2005.