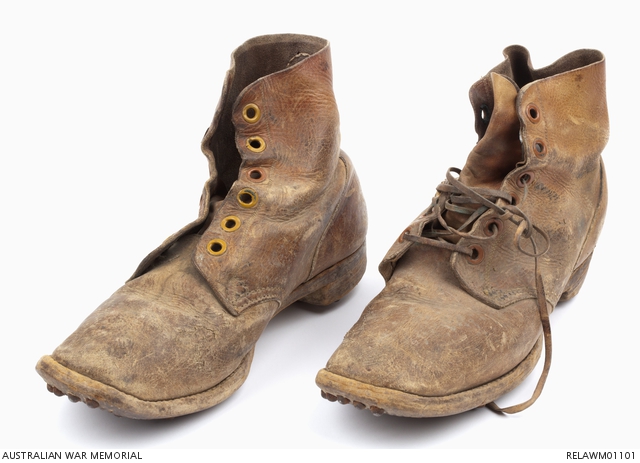 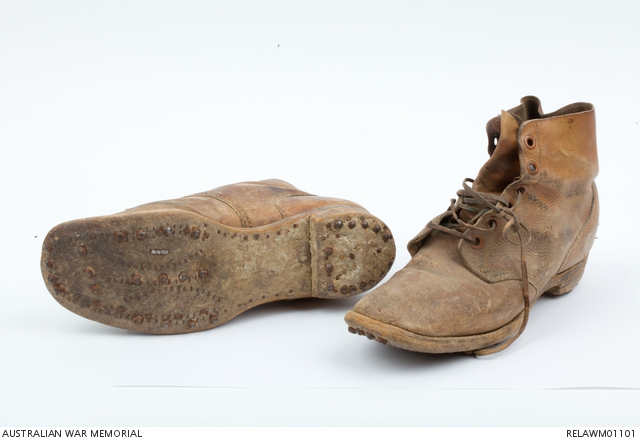 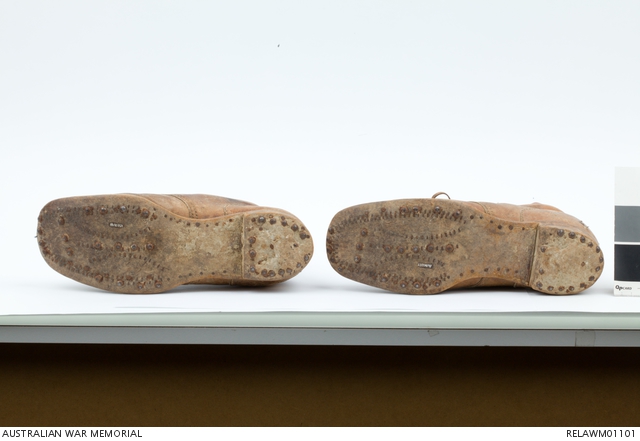 Pair of Australian Army issue ankle boots made from brown grained leather. Each upper is made from three sections - the vamp, the quarter and the rear counter. There is no lining to the boots. Six brass eyelets are fitted to each side of the quarter centre above the long tongue, each row backed by a strip of leather. There is a vertical reinforcing strip up the rear counter. The thick composite leather soles are fitted with a pattern of iron hob nail along the sides, centre and toe, augmented by rows of steel staples following the same pattern; there is a double row of these staples along each side. Each stack heel is constructed from five leather strips, tacked to the sole and provided with iron hob nails. The sole just forward of each heel is incised-marked '1913'. There is light coloured mud compressed into the heels. A flat-profile leather lace remains in the eyelets of the left boot - there is none remaining in the right boot. Overall the boots have suffered abrasions, chips and scratching, with ingrained dirt and mud evident. Particularly noticeable are a pattern of deep incisions to the upper leather of the left boot instep.

Pair of other ranks leather boots worn by Lieutenant Colonel Walter Ramsay McNicoll during the period from the landing on 25 April until his wounding during the Second Battle of Krithia on 8 May 1915. McNicoll, born 27 May 1877 at Emerald Hill, Melbourne, trained as a teacher and became founding principal of Geelong High School in 1911. He was an active member of the militia from 1905, when he was commissioned as a second lieutenant in the 5 Australian Infantry. Promoted to lieutenant on 27 August 1907 and captain on 16 January 1911, McNicoll was transferred to the 60 Infantry Battalion in July 1912 where he was promoted to major, and was later transferred to the 70th Infantry in December 1913.

On 28 August 1914, McNicoll was appointed to the AIF as second-in-command of 7 Infantry Battalion, with the rank of major; and later to command the 6 Battalion as a lieutenant colonel in early April 1915. He led 6 Battalion for the landing at Gallipoli on 25 April 1915 and found himself commanding the scattered units of both 6 and 7 Battalions after 7 Battalion's commander, Lieutenant Colonel Harold 'Pompey' Elliott was wounded in the ankle. After advancing to the Razorback, he and his troops were forced to fall back on Bolton's Ridge, where McNicoll directed the defence over the following few days.

Shortly after the lines had been consolidated, 6 Battalion was relieved by 12 (Deal) Battalion of the Royal Marines on 29 April. Whilst making a hand-over inspection of the position a few days later, on 1 May, McNicoll's dishevelled appearance unnerved a young marine who shot at him. The bullet missed but killed their own commander, Lieutenant Colonel Richard Bendyshe. Pandemonium broke out and men started firing. Three other men were shot and McNicoll had to defend himself from being bayonetted from several directions, suffering only mild wounds, but his notebooks and revolver were removed and he was bound and blindfolded as a spy. Only when 6 Battalion's adjutant recognised him and freed him as he was being removed from the trench was he taken down to the beach and treated by Naval Division doctors. He was able to return to duty two days later.

On 3 May, as part of 2 Brigade, 6 Battalion was transferred to the southern Cape Helles section of the Peninsula, where the Brigade was ordered to assault the town of Krithia in a poorly planned and fruitless operation on 8 May. The areas forward of the town were strongly held by Turkish defenders and the attackers were forced to advance across open ground in daylight, constantly losing men as they moved forward. Most of the officers and NCOs of each battalion were casualties, with 6 Battalion losing 365 men in a matter of an hour. McNicoll was slightly wounded as he rose from a trench but still moved forward, before being hit in the stomach by a bullet some 200 metres further on. He was recovered after dark by stretcher bearers after his position had been noted by historian Charles Bean during the attack, and evacuated to Alexandria. The bullet was removed from near his hip in England on 13 August 1915 and kept with some pride by McNicoll in an paper envelope labelled 'The Bullet Krithia May 8th 1915'. This is held in the Memorial's collection under accession number REL/08579, while the medical tag attached to him for his evacuation, describing his wound, is held under number PR83/145.

For 'repeatedly exhibiting gallantry and skill in the command of his Battalion' during the first few days of the Gallipoli Campaign, McNicoll was awarded the Distinguished Service Order in June 1915. He was invalided back to Australia in late 1915, but was judged well enough to be appointed to command the 10th Infantry Brigade on 10 February 1916, in which position he remained until the end of the war.

All officers in the AIF were issued with and wore other ranks uniforms and boots when involved in operations, and these ankle boots are typical of this general issue. Made in 1913, they were worn by Walter McNicoll throughout his Gallipoli service, from 25 April until his wounding on 8 May. They have never been cleaned and still bear the scars of his action there and the dust and dirt of the Peninsula. The Australian War Records Section notes that these boots were 'taken off by ward orderly on Hospital Ship 'Guildford Castle' on May 11th and not worn since'.