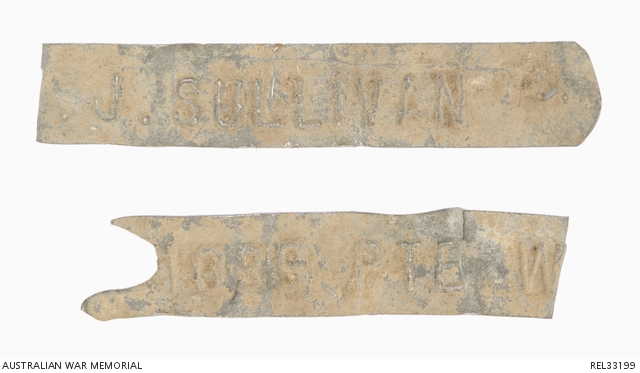 Aluminium strip stamped with the words '1039 PTE. W.J.SULLIVAN'. The strip is snapped into two pieces between the letter 'W' and the full stop. There is a hole punched after the word 'Sullivan', and the remnants of a hole before the number '1039', which would have originally held the strip to a wooden grave cross.

Born in 1895 at Clifton Hill, Victoria, William James Sullivan was working as a stockman in Kalgoorlie, Western Australia, at the outbreak of the First World War. He enlisted in the Australian Imperial Force on 16 September 1914 at the age of twenty-one, becoming Private (Pte) 1039, an original member of 9 Infantry Battalion.

Sullivan took part in the landing at Anzac Cove at dawn on 25 April 1915, his unit being one of the first ashore. On 28 June two companies of 9 Battalion (which was then holding the southern flank of the Anzac line) were ordered to advance on the Turkish positions at Sniper's Ridge and the Knife Edge. On reaching the first ridge, a group of five soldiers including Pte Sullivan were ordered to continue into the next valley. After reaching the base of the Valley of Despair, which formed part of No-Man's Land, this group became separated from the rest of the battalion, and Pte Sullivan was killed. He was initially noted as missing, but a court of inquiry in 1916 found that he had been killed.

His body was not recovered during the campaign, but was located by the Graves Registration Unit in 1922 and buried at Lone Pine Cemetery. The aluminium marker would have been attached to a grave cross erected by the Imperial War Graves Commission in the early 1920s as a temporary marker.