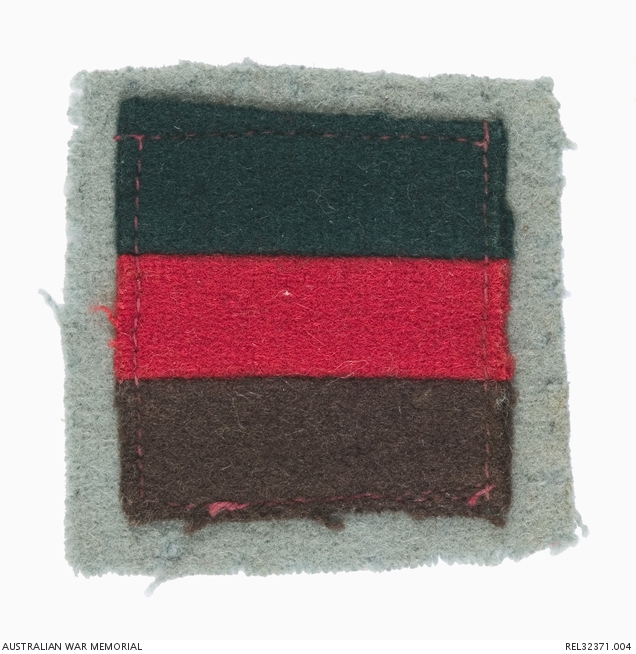 Horizontally aligned square colour patch for Australian Armoured Corps training units, divided in horizontal strips, dark green over red over dark brown, on a grey background. Worn as a distinguishing unit indication at the head of each sleeve from 1941.

Colour patch collected during the Second World War by Miss Golda Jean Ellis, a member of Cheer Up Hut Number 2 of the Murray Bridge chapter of the Adelaide Cheer Up Society. Miss Ellis collected many colour patches from servicemen whom she and other Cheer Up Society girls met at the Murray Bridge railway station. Most of these patches were attached to the inside of her uniform cape, (see REL32369) but a number remained spare or unused. The Cheer Up Society provided relaxation, meals and social activities to the many thousands of servicemen who passed through the city. As well as dances, the Society provided books, magazines, musical instruments and meals, and members devoted their time to socialising with servicemen. Miss Ellis recalled that she would meet the troops at the station, bearing a tray filled with fruit and chocolates which were often exchanged for colour patches. One of the soldiers she met, Lieutenant (Lt) Oliver Zachariah "Ozzie" Neall, of 2/8 Infantry Battalion, with whom she had been acquainted before the war, was returning home to Casterton, Victoria, on leave from Darwin, and they married at Murray Bridge on 23 October 1943. Lt Neall had been awarded the Distinguished Conduct Medal (DCM) as a sergeant in 1941 for destroying three Italian tanks during the attack on Fort Pilastrino (Tobruk) on 21 January 1941. Mrs Golda Neill (nee Ellis) died in Adelaide, SA in November 2003. This colour patch was worn duirng 1941-42 by Armoured Corps personnel undergoing courses of instruction to form cadres for the training of new regiments. It was apparently also worn by staff of the Armoured Fighting Vehicles School