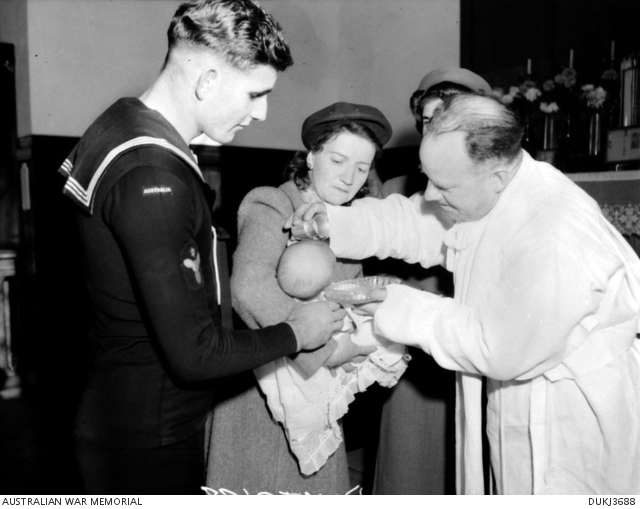 Christened at the Sacred Heart Roman Catholic Church, Kure, Japan, on 15 November 1950, is Edward John Mulholland, son of Captain and Mrs E J Mulholland of Fairlight, NSW. Mrs Mulholland was previously a member of the Australian Army Medical Women’s Service (AAMWS), on the staff of the British Commonwealth Occupation Force (BCOF) General Hospital, and will be remembered by many as Nurse Valerie Keenan. Her home was at Toowoomba, Qld. Godfather to the baby Edward is Mrs Mulholland’s brother, Ronald, who is Leading Stoker on HMAS Warramunga. This is the first time he has seen his sister for six years, and the christening has been delayed so that he could take his place as godfather. The godmother is Mrs H Dunkley of Auburn, NSW. Father Reid is officiating. Left to right are: Leading Stoker Keenan, Mrs Dunkley holding baby Edward, Mrs Mulholland and Father Reid.