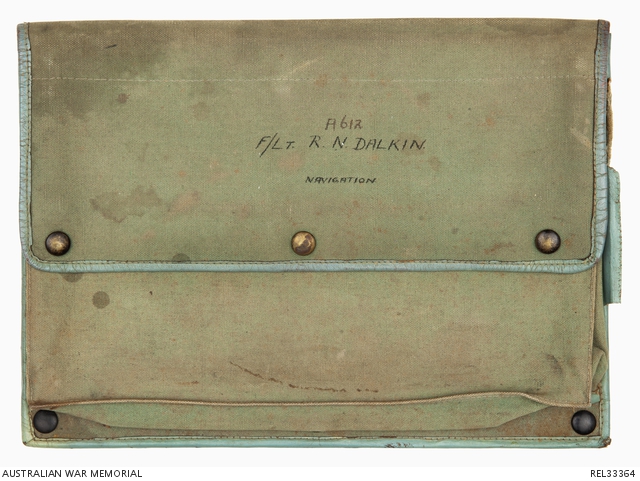 Green leather and canvas navigator's case consisting of a backing board bound in green leather on the reverse and lightweight canvas on the front, finished with green leather piping. Integral to the canvas front is a closing flap (also finished in leather piping) with three snap fasteners which attach to a gussetted pocket, also of canvas. The pocket features a deep cutout along its top for easy access to the material stored inside; the cutout is also lined with leather piping. The reverse is fitted with six female snap fasteners. Written in pen on the front of the closing flap is 'A612 / F/Lt R.N. DALKIN / NAVIGATION'.

Associated with the service of 260612 Flight Lieutenant Robert Nixon Dalkin. Dalkin was born in England on 21 February 1914 and immigrated to Australia in 1929. After two unsuccessful attempts to join the Royal Australian Air Force in the early 1930s he was accepted as a cadet in December 1939. Obtaining his commission as a pilot officer on 4 May 1940 Dalkin was posted to flying training duties at several units before completing a Navigation and Reconnaissance course at Point Cook in Victoria. He was then posted to 2 Squadron at Laverton, Victoria where he undertook conversion training to become a pilot, capable of flying the Lockheed Hudson bomber. In 14 months he completed over 50 anti submarine and convoy escort sorties. On 14 March 1942 Dalkin was posted to Darwin as flight commander of 'B' Flight, 13 Squadron with the rank of flight lieutenant. He immediately commenced operational flying in Hudsons against the Japanese, taking part in the first attack on Japanese shipping and facilities at Ambon in conjunction with a formation from 2 Squadron. Over the next ten weeks Dalkin flew more than 200 hours and 24 sorties over Ambon and Timor including three offensive reconnaissance missions, nine strikes and 12 patrols. During most of these operations his crew consisted of: Sergeant Arthur James Charles Palmer, Sergeant Roydon William Richard Lugg and Sergeant Clifford Douglas Fisher. On one occasion Dalkin's crew led a flight of four aircraft in a moonlight attack on Koepang, Timor. Two of the aircraft made an attack upon shipping, while Dalkin led the remaining aircraft in an attack upon the aerodrome, diving to 1500 feet before releasing bombs on the enemy aircraft lining the runway. In addition to releasing their bombs Dalkin's crew machine-gunned grounded aircraft despite intense anti aircraft fire. It was estimated that six enemy aircraft were destroyed in this attack and two others probably destroyed. On 8 July Dalkin was awarded the Distinguished Flying Cross for 'displaying outstanding courage and determination' in the course of his many operational flights. 13 Squadron was also awarded the United States Presidential Unit Citation for outstanding performance of duty in action from 13 April to 25 August 1942. Dalkin remained with 13 Squadron throughout 1942 also serving as Operations Officer, Head Quarters North Western Area until posted south as an instructor at 1 Operational Training Unit in 1943, and later Chief Instructor at Bairnsdale Victoria. In October 1944 he was posted to liaison duties in England with Royal Air Force Bomber Command. There he flew operations to assess RAF techniques that could be developed for use by the RAAF in the Pacific. Dalkin returned to Australia at the end of the war and following demobilisation was a founding member of Trans Australia Airlines. However he rejoined the RAAF only a few months later, and was allocated the service number O21919. Dalkin gained a permanent commission as a squadron leader in September 1946. Appointed wing commander in 1950 and group captain in 1956 Dalkin held a variety of posts through his career, including an appointment as honorary Aide-de-camp to the Governor General. Dalkin retired in 1968 with the rank of (honorary) air commodore and was appointed to the post of Administrator of Norfolk Island. In 1974 he published a book 'Colonial era cemetery of Norfolk Island'. He was also patron of the RAAF Hudson Squadrons Association until his death in 1991. The snap fastenings on this case allows it to be fitted adjacent to the Navigator's position in a Lockheed Hudson. As this case was manufactured as part of the standard equipment issued with the Lockheed Hudson, the green leather is a match to that used in the aircraft.