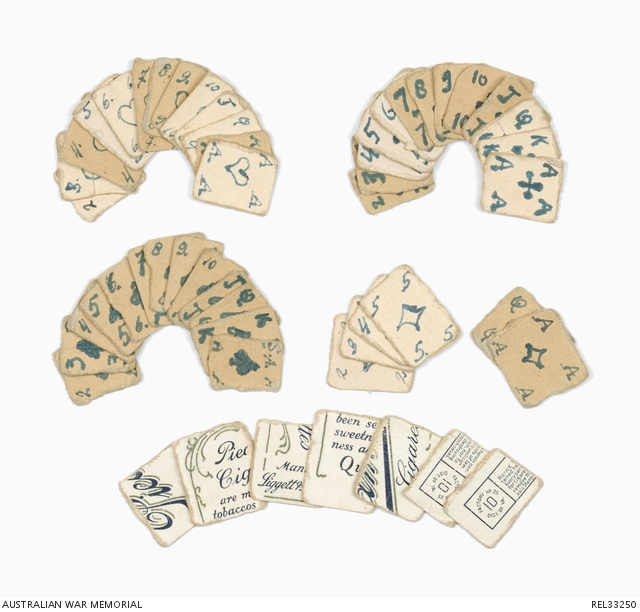 Set of 52 small playing cards made from the cardboard box of a packet of US manufactured 'Piedmont' cigarettes. The cardboard has been roughly torn into pieces of approximately equal size, and marked in blue ink with the numbers and symbols of the various suites. All thirteen cards of each suite are present, but there are no Jokers.

Set of playing cards made by Herman van Gelder in a prisoner of war camp in Indonesia. The cards are made from pieces of torn cardboard taken from a ‘Piedmont' cigarette box. Herman van Gelder, his wife Rosaline (nee van Mourik) and their children Max, (11) Hans (10) and Carla, (7) were residing at Semarang, on the island of Java in the Netherlands East Indies, at the time of the Japanese invasion in January 1942. Although a civilian, Herman was separated from his family and interned in a prisoner of war camp as a result of his service in the Semarang ‘Stadswacht' (Town Guard) unit. He was initially held at the ‘Jaarmarkt' camp near Surabaya, but was later moved to Pakanbaroe in east Sumatra, where he worked on railway construction. The cards were made in captivity so that Herman could play bridge, a game which he particularly enjoyed.