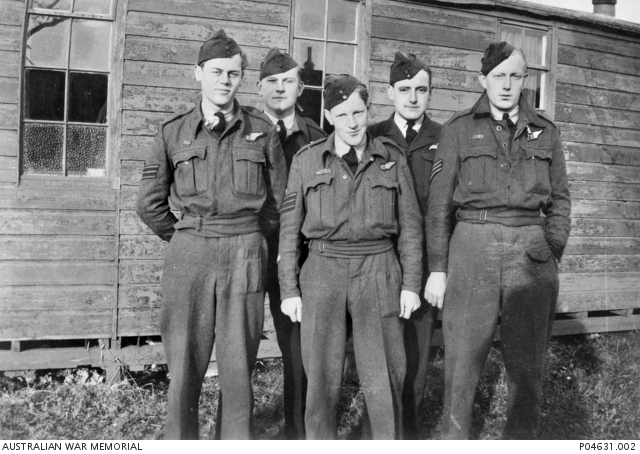 Group portrait of RAAF crew members of No. 70 Squadron, RAF. Identified, left to right: 427508 Flight Sergeant (Flt Sgt) Raymond Edwin James (rear gunner), of Perth, WA; O16029 (425316) Flight Lieutenant Geoffrey Gordon (Geoff) 'Knyvett the Navigator' Knyvett, navigator, of Coorparoo, Queensland; 418752 Flt Sgt Thomas Ronald (Ron) Lowther, wireless operator, of Colac, Victoria; 417355 Flt Sgt Lloyd 'Pontius the Pilot' Fallon, pilot, of Adelaide, SA, and 422130 Flt Sgt James Russell 'Swifty' Burgess, bomb aimer, of Rockdale, NSW. As each came from different Australian states, there was much state rivalry between them. They were flying their 22nd mission together and were returning from a successful bombing raid in Romania on 29 June 1944 when their aircraft was shot down by a German fighter. Only one crew member, Flt Lt Geoff Knyvett, survived the crash. He bailed out, sustained a broken leg and was taken prisoner of war (POW). Knyvett was released from a prison camp in Bulgaria (probably Shumen) in September 1944, when the new Bulgarian government released all 328 POWs from nine nations. Flt Lt Knyvett later commemorated the loss of his fellow crew members by giving each of his children a middle name that was the surname of one his crew. Knyvett went on to a long career in the RAAF, retiring as Wing Commander in 1975.