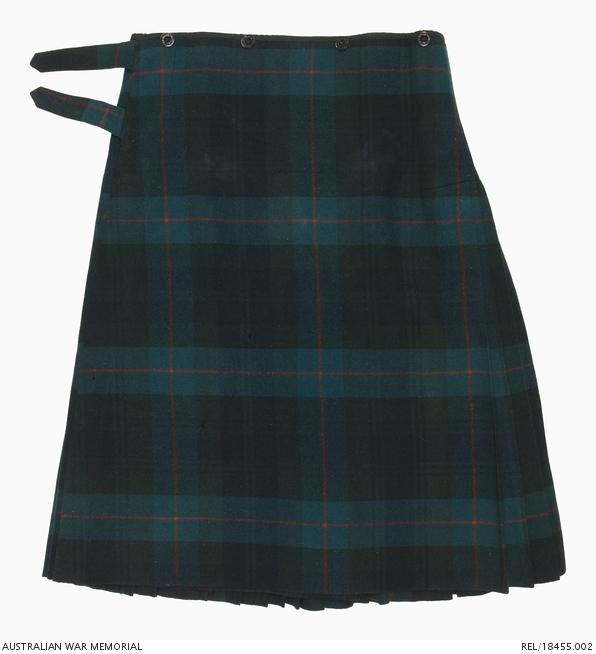 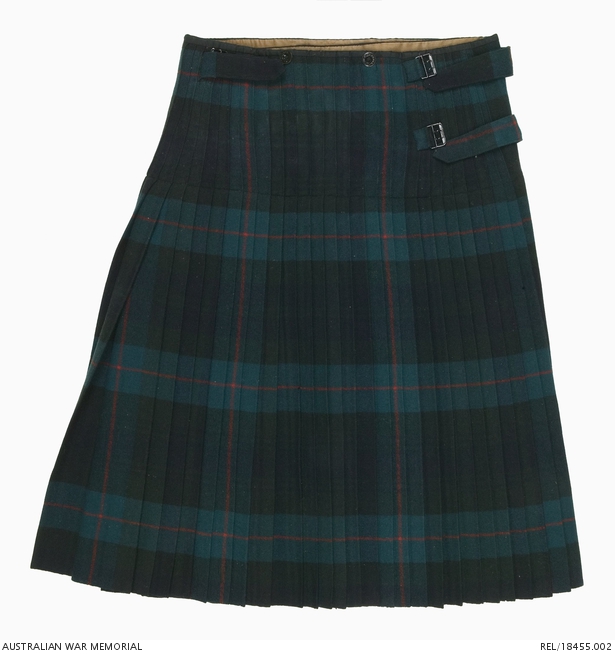 Gordon sett tartan kilt of wool twill in colours dark blue, dark green and green with red overstripe. Kilt pleats are machine stitched. Waist edge is bound with black wool sateen machine stitched to upper edge of tartan. Upper waist is lined with brown wool and cotton mixture in satin weave. The three kilt straps are of the same Gordon tartan and lined with black wool and brown cotton mixture; one strap at the underskirt waist and two at the upper skirt edge. Corresponding buckles are of black coated brass, each with two prongs and with 'PARIS' stamped at one edge. Buckles are stitched to short tartan tabs. Waist edge has four black coated brass buttons at the front and two at the back, all stamped 'NE PLUS ULTRA'. Lower edge of kilt is a selvedge.

Gordon sett tartan kilt with red overstripe believed to have been worn by Private Charles John Stewart. The Victorian Scottish Regiment (VSR)was formed in August, 1898 and was originally comprised only of Australians of Scottish origin or descent. Members of the regiment had to provide their own uniforms so they paraded in their own clothes until the end of 1899 when 100 uniforms became available for purchase. The first doublets worn with the kilt were khaki, with red doublets introduced in 1901in time for the review held to mark the opening of the first Commonwealth parliament in Melbourne. 1694 Private Stewart served with the 5th Mounted Rifles contingent which left for South Africa in February 1901. He was invalided and returned to Australia on 29 January 1902. Stewart may have continued to serve with the VSR after his return to Australia. In 1912 the VSR were re-designated the 52nd Hobson's Bay Infantry. Four of the volunteer companies, A,B,C and D, were located in South Melbourne and continued to wear Scottish dress.