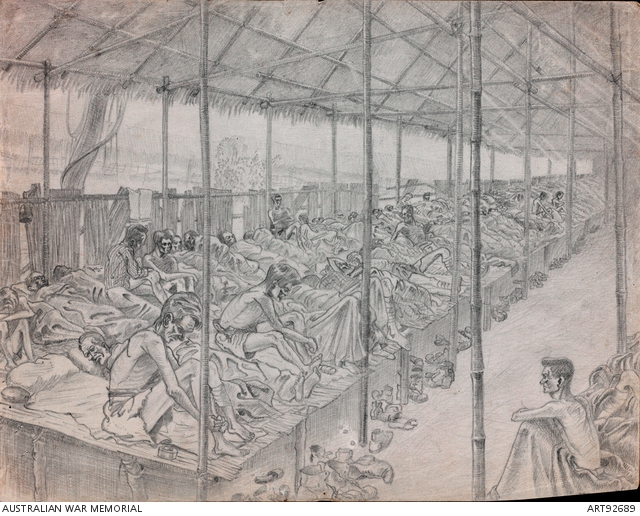 A hospital camp that was established at Kanchanaburi when the railway line construction had been completed. Men were brought back to these camps on stretchers off river barges or the railway. They suffered from diseases such as dysentry, malnutrition, beri beri, pellagra and all of them had malaria. In this work the man in the foreground is dabbing at a tropical ulcer on his leg.

One of five surviving drawings by Gunner James Joseph French (1920 - 1986) produced while a POW under the Japanese. French enlisted in June 1941 in Brisbane and went to Mayala with the 2/3 reinforcements for the 2/10th Field Regiment. Prior to the war he was employed in an insurance company in Brisbane. In Malaya French was posted to the 19th Battery at Mersing on the east coast of Malaya. He was one of the 834 officers and men of the 2/10th Field Regiment taken prisoner by the Japanese on 15 February 1942. After 6 weeks in the Changi Prison area he was moved on 3 April 1942 to the centre of Singapore to work on the building of a Japanese shrine at Bukit Timah. He was sent back to Changi in December 1942 and then sent with F Force to work on the Thai Burma Railway.

On his return to Australia French told a local newspaper reporter ' that while in Japanese hands he was able to "scrounge" books on art and it was in studying these that he developed a love for art and resolved to further his studies as soon as he was released...and that while working on the Burma Railway he had kept a record of the frightful humiliation and cruelty of the Japanese.' French went on to state that he did this at the request of Lieutenant Dillon who was the Commanding Officer of F Force.