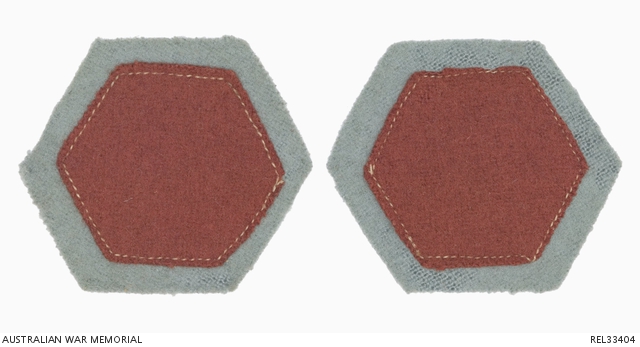 Pair of wool felt colour patches, each consisting of a burnt orange hexagon on a grey background.

Australian Army Dental Corps colour patch issued to Major Sydney Levine between 1943 and 1945. N75115 Captain Sydney Levine served in the militia as a dental surgeon from June 1940. He was first posted to the Army Dental Centre at Ingleburn, NSW, before being transferred to 17 Field Ambulance. Based at Bathurst, NSW, he regularly visited the Cowra POW Camp to provide dental services to the inmates. In August 1942 Levine enlisted in the AIF and was assigned the service number NX111950. He served with 117 Field Ambulance and 114 Convalescent Depot before being promoted to major in November 1942 and appointed Officer Commanding (OC) 58 Army Dental Unit (ADU). Levine subsequently served in New Guinea at Port Moresby and Madang, where he was OC of 71 and 68 ADUs, and at Jacquinot Bay in New Britain, where he commanded 83 ADU. He was discharged from the army on 5 September 1945. Levine later served as a lieutenant colonel the Citizen's Military Force between 1963 and 1971, as a consultant periodontist to the army.